Amazon Token promos in social media are a scam

Recently, some social media posts started to claim that Amazon has begun a “presale” of its own crypto tokens. However, the online retail giant officially called them fake, while an internet security firm Avast said that such messages are part of scams targeted to steal money and harvest personal data.

For instance, a Facebook post from December 27, 2021, that was later removed, said: “The Amazon Token payment system will facilitate a more accessible, more connected global financial system.” Similar messages on Facebook with a photo of Amazon founder Jeff Bezos linked to the purported “official Amazon Token” site and stated: “The ‘Amazon Token’ Presale is Started.”

Clicking on such links, some users received a warning from their browser about a potentially malicious site. Others may see a website containing genuine-looking Amazon logos and offers free Amazon Prime memberships for purchasers. 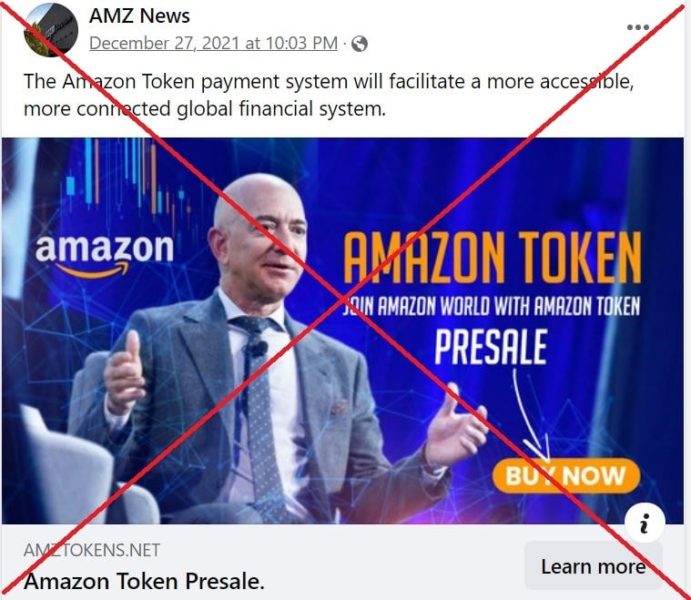 Amazon officially claimed to AFP on January 3, 2022, that it has no cryptocurrency token and that claims to the contrary are part of a scam.

“We take any attempts to misuse our brand seriously,” said Amazon spokesperson. “We maintain a site to assist customers in identifying phishing attempts, including fake webpages. Amazon investigates these complaints and uses them to protect customers and hold the bad actors accountable.”

At the same time, the internet security firm Avast has noted a proliferation of scams seeking to lure consumers to a so-called Amazon Token.

“We have found that these new scams are very effective, yielding over $100,000,” the company stated in a December 14, 2021, official blog post. “Over 300 Avast users have been protected from the scam in the past week. These offers are propagating through malicious advertisements that imitate legitimate news sites and rely on rumors that have been around since July 2021 that Amazon will be offering Tokens for sale.”

Avast warned that the scheme appeared to be an effort to trick people out of other cryptocurrencies and potentially steal personal information for malicious purposes.

“If the user attempts to purchase the Token, they have to create an account, then ‘purchase’ the Token with other cryptocurrencies, such as Bitcoin, Ethereum, LiteCoin, and others,” the internet security firm said. “Creating an account could potentially give the attackers an email password combination that could be used in other attacks.”

According to Avast, the fraudulent posts have appeared in more than a dozen countries and come amid growing interest in Bitcoin and other cryptos, which have seen wild volatility that can deliver massive gains or losses to investors. Facebook also was trying to launch its own global digital coin known as Diem but failed due to regulatory issues.

In July 2021, Amazon indicated it was studying using cryptocurrency for payments but had said later it has no specific plans concerning crypto.