Bitcoin: Falling To Justify Its Value

The start-of-the-year drop in cryptocurrency prices is due to various reasons (which we will go through). Still, with a cool head, you may recognize that crypto, through complex mechanisms of self-regulation, rejects attempts to pump it up with fiat money. You can even say that cryptocurrencies want to maintain their role as money and not turn entirely into an investment asset. 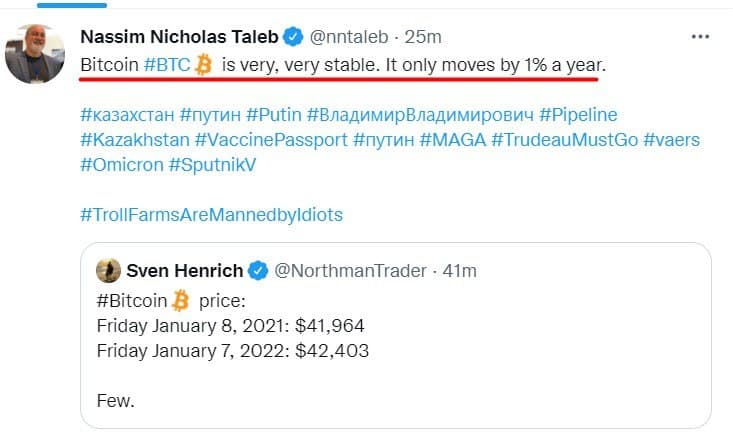 In the first week of the year, cryptocurrency prices crashed with a bang. By January 7, Bitcoin fell to $ 41,140, and ​​Ethereum dropped below $ 3,500. Altcoins plunged as well, with some losing up to 20% in value. The capitalization of the crypto market as a whole sank to $ 2 trillion; investors lost billions of dollars. Stablecoins are enjoying the highest growth, and the fear index settled at around 15 – extreme fear.

The collapse of the crypto market coincided with a decline of stock indices (primarily the S&P 500) and shares of tech giants such as Microsoft (-3.8%), Google (-4.7%), and Tesla (-5.3%). Simply put, the damage hit the markets that have been growing for the last year and a half with freshly printed fiat money pumped into the economy.

The drop happened after the release of the FRS December meeting report – the American authorities, as it turned out, are considering the possibility of an earlier increase in the base interest rate than previously assumed, which means that financial markets will lose much of the monetary stimulus that fueled them.

As a result, BTC got down to $ 41,140 – this despite setting its historical record of $ 69,000 as recently as November 10 (at the same point, the crypto market capitalization exceeded $ 3 trillion for the first time). But back then, the infusion of the world economy with dollars (and other currencies) was still in full swing, and the most discussed issue was the record inflation levels in the United States.

Investors tried to “hide” from inflation by investing in cryptocurrencies for high returns, as well as in stocks they considered “real assets”. But in doing so, they accelerated another type of inflation – of cryptocurrencies and financial assets. There is no “magic wand” in economics; everything is very strict. You can print fiat money, pour it into cryptocurrencies and stocks, and then pour it back out. But if there is no real proportionate economic growth behind all this, rest assured the “hamsters” will still get “shaved”.

In my personal opinion, Nassim Taleb is likely right: cryptocurrencies themselves strive for stability. When we rejoice at the non-stop growth of their prices, we do not think about it being caused by a “pumping” of fiat money into crypto assets. But any pump is inevitably followed by a dump, which causes volatility.

But Satoshi Nakamoto was not creating an investment asset; he was creating money. Money as a means of payment, only based on different principles than fiat currencies. He probably couldn’t foresee such a rise in the BTC rate.

As you thoughtlessly “pump” cryptocurrencies with fiat, they stop serving the function of money for which they were created. Instead, you prove critics right when they argue that crypto is a “bloated” asset with nothing behind it. If you buy Bitcoin for dollars, then sell it and get even more dollars – then yes, it is useless; it has no economic function. If you purchase Bitcoin to conduct transactions and benefit your business, it fulfills its intended purpose, justifying its own existence.

And it is much easier for BTC to be a means of payment at $ 41,000 than at $ 59,000. We might not figure out the economic mechanisms of cryptocurrency value stabilization for a while, as they likely lie at the intersection of finance and psychology. In any case, we see the market trying to protect itself against a bubble, which is where the real “smart money” comes in.

There is, of course, the opposing view. Financial conglomerate Goldman Sachs believes that Bitcoin will continue to take away the market share of gold, potentially raising its rate to $ 100,000. Today, the capitalization of BTC, adjusted for circulating volume, is less than $ 700 billion, and the value of gold available for investment is $ 2.6 trillion, so the first cryptocurrency occupies 20% of the means of saving market. In the event of its share growing to 50% over the next few years, Bitcoin price will reach six figures with a cumulative annual return of 17-18%.