It is not all plain sailing when it comes to Bitcoin’s price recovery this year, with U.S. liquidity conditions calling the shots.

That is according to economist Lyn Alden, who, in private comments to Cointelegraph, cautioned on Bitcoin staying bullish after its January gains.

Optimism is increasing throughout crypto as BTC/USD broadly retains levels, which are 40% higher than at the start of the year.

What the rest of 2023 may hold, however, is still a topic of debate, and Alden suggests that it is naive to assume that the good times will continue unchecked.

The reason, she says, lies with the United States lawmakers and the Federal Reserve.

“I expect the BTC bottom to be a process,” she summarized about the current state of Bitcoin.

That recovery has effectively removed any trace of the FTX debacle from the chart, with BTC/USD now circling its highest levels since mid-August.

BTC/USD traded at around $22,600 at the time of writing, data from Cointelegraph Markets Pro and TradingView showed. 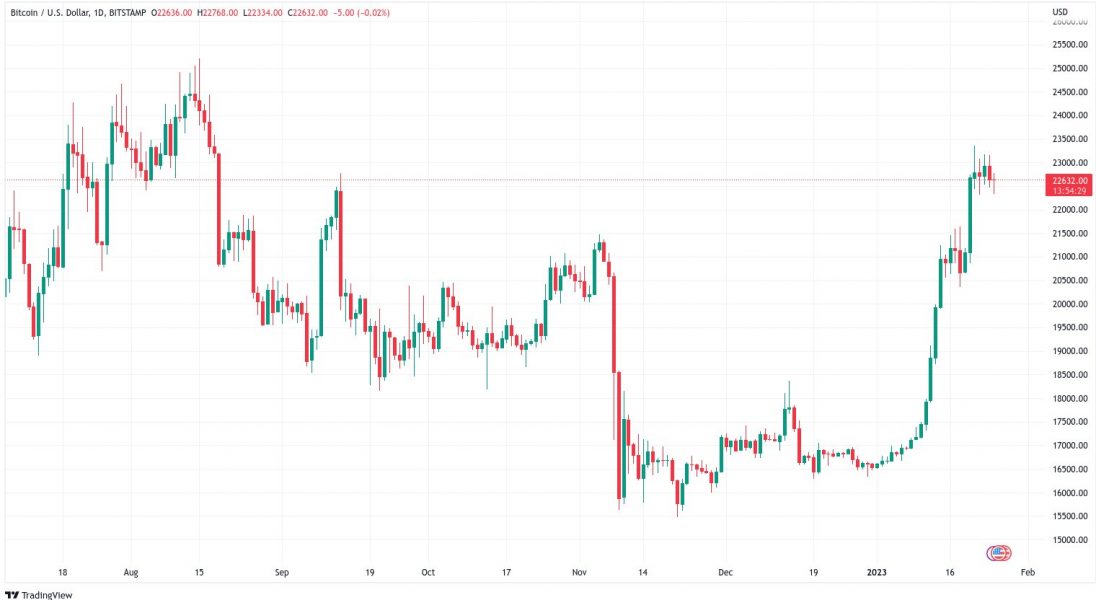 What could lie beyond that “catch-up,” however, could be less savory for bulls.

The Fed is currently conducting quantitative tightening (QT), removing liquidity from the economy to fight inflation after several years of mass liquidity injections, which began in March 2020.

These are being mitigated thanks to U.S. domestic politics, but later on, the status quo could shift back to the kind of restrictive mood seen throughout Bitcoin’s bear market year of 2022.

“There is considerable danger ahead of for the second half of 2023,” Alden explained.

“Liquidity conditions are good right now in part because the U.S. Treasury is drawing down its cash balance to avoid going over the debt ceiling, and this pushes liquidity into the financial system. So, the Treasury has been offsetting some of the QT that the Federal Reserve is doing. Once the debt ceiling issue gets resolved, the Treasury will be refilling its cash account, which pulls liquidity out of the system. At that point, both the Treasury and Fed will be sucking liquidity out of the system, and that would create a vulnerable time for risk assets in general, including BTC.”

If H2 proves to be Bitcoin’s reckoning, it will tie in with other warnings from market commentators regarding 2023.

As Cointelegraph reported, Arthur Hayes, former CEO of exchange BitMEX, has a much grimmer forecast for the year, likewise courtesy of Fed policy.

In the long term, however, Alden is confident that Bitcoin will recover from its recent lows for good.

“I do think this is a deep value accumulation zone for BTC with a three-to-five year view, but traders should be aware of the liquidity risks in the second half of this year,” she concluded.

Bitcoin Bitcoin Price Federal Reserve Markets
You May Also Like