Bitcoin is on a downward trajectory, despite the fact that the cryptocurrency industry overall is growing quite vigorously. But BTC holders are clearly in a foul mood right now, although they still hold on to the “million-dollar bitcoin” outlook. If I am to give a dissenting opinion – the BTC depreciation against the dollar signifies a healthier cryptocurrency market.

As this article was being written, the BTC rate had just fallen below $36,000 per cryptocoin. It is difficult to say what will happen next, but April clearly was an awful month for bitcoin, as quotes fell by 16.2%, marking a correction that followed a two-month increase. And even though BTC demonstrated growth again just the other day – by almost $2,000 – it could not save the situation. 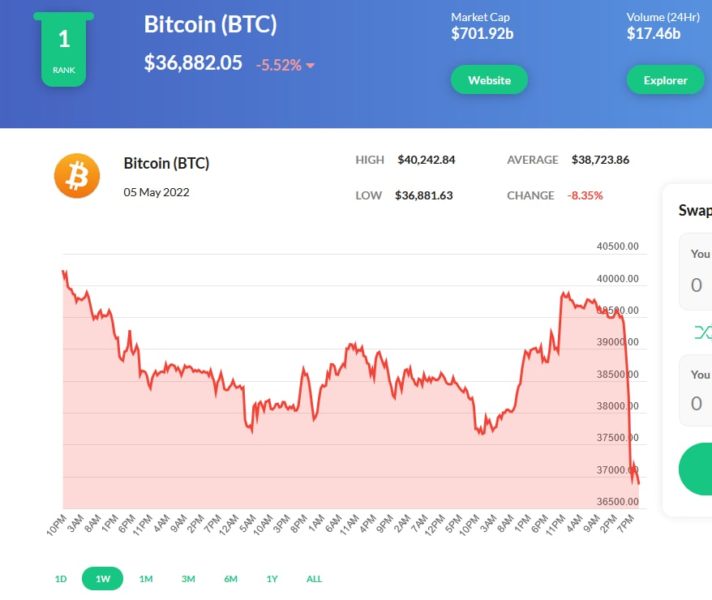 Miners’ incomes also took a hit. Bitcoin miners earned $1.16 billion, down 4.3% from a month earlier. Add to this the largest weekly outflow of money from BTC funds since June 2021 – $133 million worth of assets. In total, they have hemorrhaged $310.8 million since the beginning of April.

A combination of those factors has created a situation where major bitcoin holders and investors have no choice but to bear losses. As such, the MicroStrategy platform, in its quarterly report, declared a $1 billion loss from BTC asset devaluation. The company currently has 129,218 BTC at an average purchase price of $30,700 on its balance sheet, of which 19,466 BTC are pledged as collateral to Silvergate Bank.

The high volatility of the cryptocurrency market can be pinned on geopolitical instability, the war in Eastern Europe, the tightening of the Fed’s policy, and numerous other issues. But what really concerns everyone is the future. Cointelegraph experts predict that digital assets are experiencing a long-term downtrend. According to them, bitcoin can hit the bottom by November-December 2022. Their forecast assumes that the $69,000 BTC price peak in November 2021 marked the latest cycle high, and the market is now going through a correction phase usually seen after the peak. As long as the correction continues, we could see the lower limit at around $24,000. In this scenario, the market can expect new BTC price records in the summer or autumn of 2023.

Similarly, the well-known American trader Peter Brandt believes that bitcoin may soon fall as low as $28,000. On Twitter, he published an analysis of the BTC chart and added that the end of a bearish channel usually leads to a decrease equal to its width. Brandt thinks the cryptocurrency could land at the $32,000 or $28,000 level, but is more inclined towards the second option.

Another renowned analyst, Philip Swift, tweeted that BTC could be in the optimal accumulation range. In his opinion, the Active Address Sentiment Indicator (AASI) suggests that bitcoin is back in the buying zone. The expert believes that this asset performs well in both bull and bear markets, signaling a medium-term low.

His point is strengthened by an analysis of previous instances where AASI reached similar levels. Around the same time, the bitcoin price also hit a low, but continued to rise in the following weeks and months.

Co-founder and former CEO of BitMEX, Arthur Hayes, believes that while many analysts expect the BTC price to decline further within the current cycle, the long-term outlook is still positive. According to him, the tightening of monetary policy in America and Europe will contribute to bitcoin’s growth up to $1 million per coin by 2030.

Jurrien Timmer, top manager from Fidelity Investments – the market leader in asset management, predicts that the price of bitcoin will climb to $100,000 – however, unlike the previous forecaster, he doesn’t provide a specific timeline. (And hey, perhaps the current inflation could weaken the dollar enough to actually make his prognosis come true)

Finally, the enigmatic crypto analyst from the Netherlands, known only as PlanB, went back to examining the value of bitcoin based on the monthly RSI. At the moment, he points to the threat of the indicator falling below 50 points, as it did in 2011, 2014, and 2018. The RSI for April is 52, but if it drops to 45, the cost of one BTC will decline to $26,000.

As someone who has been closely watching the crypto market for many years, I have my own take on the current trends. The fall in the BTC value we are witnessing is evidence of a departure from the speculative model toward mass adoption of bitcoin and other cryptocurrencies as a means of payment rather than as an investment asset. In other words, BTC is not declining – the coin assumes its real value. Yes, this is disappointing for holders, for investors who expected to capitalize on the first cryptocurrency’s rising value.

Up to this point, their gains have been impressive, I must say. However, the current shift is precisely what many have been calling for ever since 2017: BTC used not so much for investment, but as a means of payment. It was this functionality that the mysterious Satoshi Nakamoto originally intended for cryptocurrency. A means of payment cannot be very costly. Imagine if one US dollar could buy you a car! It’s untenable – such an expensive currency simply cannot serve its purpose.

So, as mass adoption continues, bitcoin will likely become even cheaper – confusing numerous stock analysts who only view price fluctuations as an eternal battle between bulls and bears.

However, do not expect the BTC cost to plunge completely. The first cryptocurrency is not going to sink to the level of a small coin used to pay for a cup of coffee: Bitcoin will primarily be the currency of large international trade. Over the past years, it has already been used in this capacity by “gray” Chinese exporters of goods and various businesses in Post-Soviet states, Latin America and Africa.

Of course, large bitcoin holders will still have their word – they have no desire to lose their investments, so we will undoubtedly see PR campaigns in the spirit of “invest in BTC before it’s too late” and further price spikes. Still, I would like to believe that the “money of the new century”, as cryptocurrencies are sometimes called, will be exactly that – a means of payment first and only then an object for investment.

Bitcoin investment mass adoption Payments ВТС
You May Also Like