The Bloomberg analyst said Bitcoin is forming a bottom similar to how it looked prior to the 2019 bull run but with one major difference in the markets.

Mike McGlone, Bloomberg’s senior commodity strategist believes Bitcoin could be developing a  “bottom” in the same way it did prior to 2019’s bull run but said there is a major difference this time around.

During a Jan. 16 interview with crypto podcaster Scott Melker, McGlone argued unlike in 2018 when financial institutions such as the Federal Reserve were easing interest rates, this time they’re still tightening along with “every central bank.”

“Back then the Fed already started easing and we held the bottom and broke out higher and then we had that issue in 2019,” he said.

“Right now they’re tightening aggressively, so you look at that and you can’t be too excited about any markets. Give it some time. Big picture, yes, really bullish Bitcoin,” McGlone added. 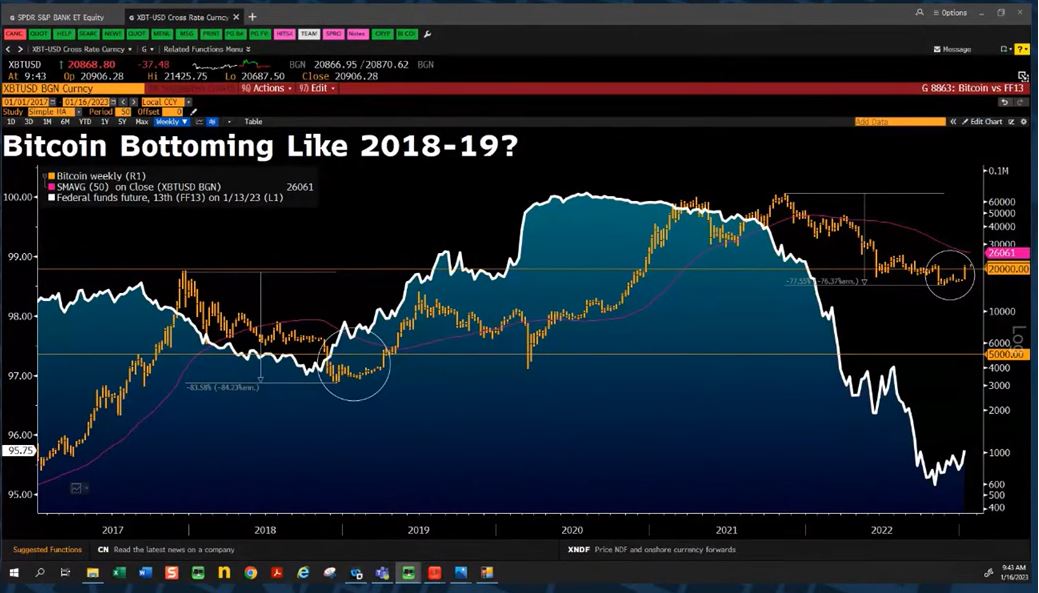 McGlone also warned BTC might not see the surge being predicted just yet as there are challenging macroeconomic conditions and pressure from interest-rate hikes.

He believes the NASDAQ is likely to dip below its 200-week moving average, which he claims is another indication BTC’s price rally may not happen soon.

“Liquidity is being pulled away still and if the NASDAQ breaks down, everything breaks down, Bitcoin is going to be part of it.”

“I still think it’s going to come out ahead so to me that’s where we stand,” he added.

McGlone also said the market has entered an “unprecedented” environment, “where we’re having bounces in what we know are bear markets and the Fed just says, sorry we’re taking the punchbowl away, we’re not giving it get back to you.”

“I mean it’s going back to the days of the Soviet Union when you have one leader and are expecting to be economically viable.”

Bitcoin Bitcoin Price Bloomberg business cryptocurrencies
You May Also Like