Before our very eyes, cryptocurrencies are reverting to their original role. What has at one point turned into an investment and speculative tool is going back to its roots – crypto as a means of payment.

It’s damn nice to watch your predictions come true. And in addition, it is fascinating to see exactly how they unfold. The reality, as we know, is never the same as what you initially envision.

I’m talking about the mass cryptocurrency adoption, which, ever since the start of the Russo-Ukrainian war, has been accelerating at an insane rate. It is observable both by obvious signs and through some indirect metrics. Let’s start with the latter.

The holders of the major cryptocurrencies are now withdrawing them from crypto exchanges. The number of traded ETH coins, for example, has dropped to 11.3% – the lowest since September 2018. 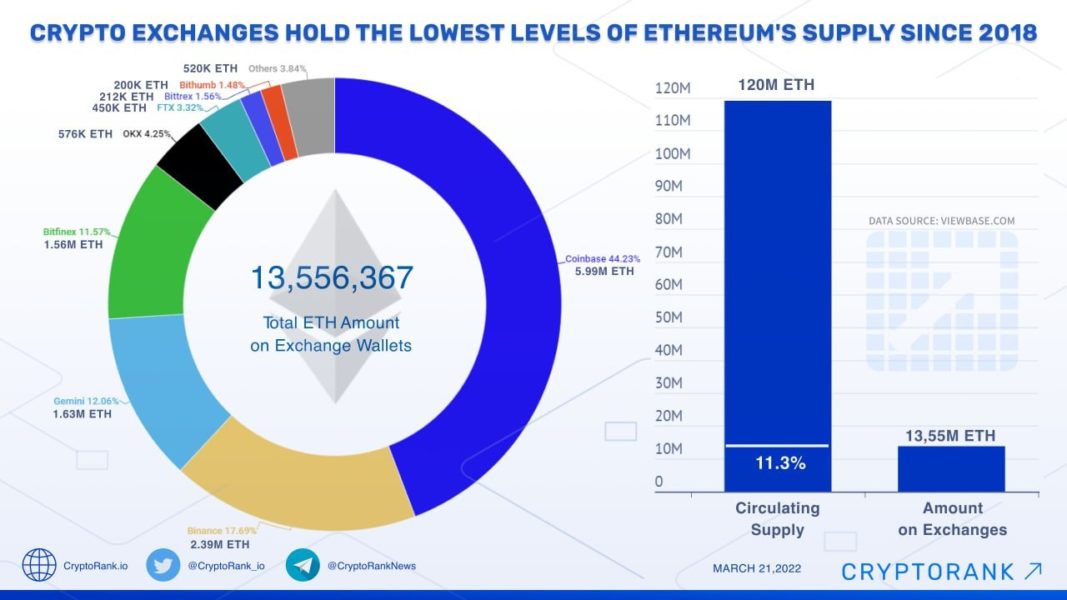 So, what is going on? Well, the crypto owners keep their coins on the stock exchange when they expect to make money off the growing value, off exchanging, or doing some speculative transactions. But when they transfer cryptocurrency to their wallets, it indicates the intention to use them for the original purpose of any money – as a means of payment.

Meanwhile, the Lightning Network’s capacity has already surpassed 3,500 BTC. For those unfamiliar, the Lightning Network is a second-layer solution for the Bitcoin network that allows you to make instant payments without the long wait for confirmation. In order to work, this system requires a certain amount of BTC locked in, and that number has now exceeded 3500.

All of the above means that bitcoin is increasingly used for settlements, like conventional money. More specifically, frequent smaller payments in large quantities. When you are buying a yacht for $10 million in BTC, you do not need to use the Lightning Network – you can wait for the transaction confirmation in your regular crypto wallet – whereas paying with bitcoins for gas at a station necessitates an instant settlement.

Therefore, the rapid growth of the Lightning Network clearly demonstrates the expansion in the use of the first cryptocurrency for casual everyday payments. And soon, most bitcoin holders are bound to realize that there are lots of cryptocoins much more convenient for small retail settlements. For example, back in 2017, the author of these lines mostly switched to Litecoin (LTC), specifically for making payments. Then, it was already called “digital silver” as a mark of their usefulness for this exact purpose, but there have been a lot of new blockchains offering fast transaction processing since.

At the end of the day, it appears that in just a month since the war broke out, cryptocurrencies have taken as many steps towards mass adoption as in the previous two years.

And now, the financial sector is catching up. Coinbase has announced that it is launching Coinbase Pay – a service that will allow users to deposit money into Coinbase Wallet online directly from a bank card. (Before, they had to use the Coinbase.com crypto exchange.)

Currently, only US and Canadian citizens have access to the new tools – it’s a sort of large-scale testing – but the company promises to soon make the service available to the whole world.

In turn, Ledger, a hardware crypto wallet manufacturer, has plans to release its crypto card. A decentralized crypto bank Baanx posted information about the release of a physical crypto card under the brand and with the technical support of Ledger on its website. There hasn’t been a release date revealed yet, but you can already get on the waiting list.

Large financial businesses are following suit in the new (for them) cryptocurrency world. The American bank Goldman Sachs (managing $2.1 trillion) has recently concluded its first OTC trade in Bitcoin options, carried out jointly with the Galaxy Digital crypto company. In the near future, operations like this are supposed to become commonplace.

For its part, Visa is focusing on the personnel issue. The payment corporation is now inviting students to take part in the cryptocurrency development program as it continues to grow its in-house crypto potential. The press release advertises an 18-month training course “aimed at building a fully qualified cryptocurrency team”.

Employees hired as part of the program will rotate on teams such as Crypto Product, Crypto Solutions, and Digital Partnerships and gain experience in specific areas like DeFi, NFT, stablecoins, and CBDC.

currency dynamics Markets mass adoption war
You May Also Like