Crypto is trying out traditional finance’s failures in hyperspeed, but it’s going to be fine

What is going to be most interesting here is seeing what happens to bitcoin and other cryptos during these Hard Times — writes George Kaloudis on CoinDesk.

The last time I wrote about a stablecoin, it failed spectacularly. So when a colleague of mine suggested I write about MakerDAO’s proposal to invest in US Treasurys to back its collateralized stablecoin DAI, I was reminded of the power I wield.

Just two weeks ago, this newsletter suggested that opaque, intertwined platforms with excessive leverage were a danger to crypto investors. That was in the shadows of the hedge fund Three Arrows Capital’s insolvency, but now Celsius and Voyager (two retail-focused yield-generating platforms) have put together restructuring plans.

Which is what you do when you’re screwed. Voyager even declared Chapter 11 bankruptcy – the “good kind of bankruptcy,” for the record (if there’s such a thing) – proving that crypto is hell-bent on playing out the mistakes of traditional finance at hyperspeed. What’s more, Blockchain.com also stands to lose $270 million from lending to Three Arrows.

Oh, and there are a handful of other not-so-great crypto things happening right now which we’ll get into, but it’s all going to (somehow) be fine.

That (and maybe more …) below.

The economy is looking not so good 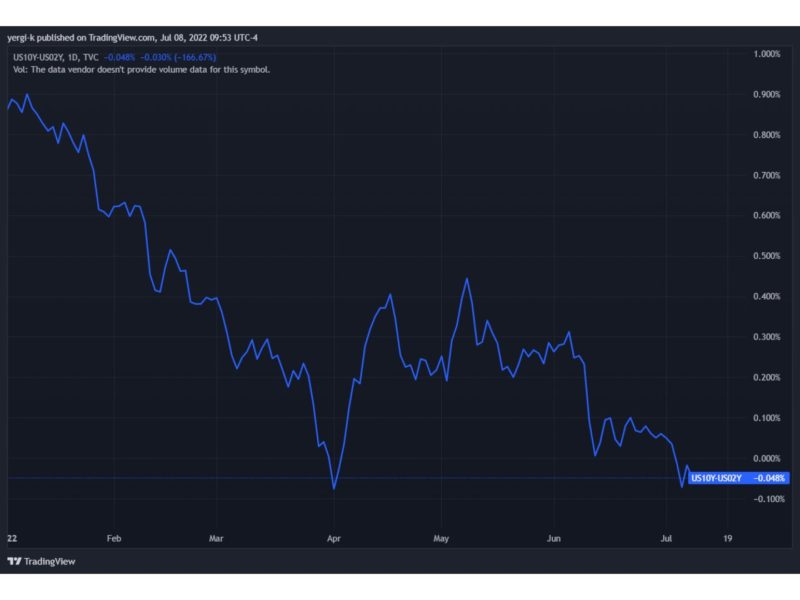 OK, but what does that mean? In plain English, the US federal government sells bonds, or Treasurys, to investors like you to fund all the stuff they do. Those Treasurys, in turn, pay you an interest rate or yield over a period of time. At the end of that period of time, the original amount is returned to the investor. If Treasurys sound like loans, that’s because they are.

The amount investors would expect to make on these Treasurys is higher the longer the loan is. That makes sense. Your money is locked up longer, so in exchange for that risk you get more yield. So then if you plotted the length of the loan on the x-axis against yield, you’d get a logarithmic-looking growth curve. 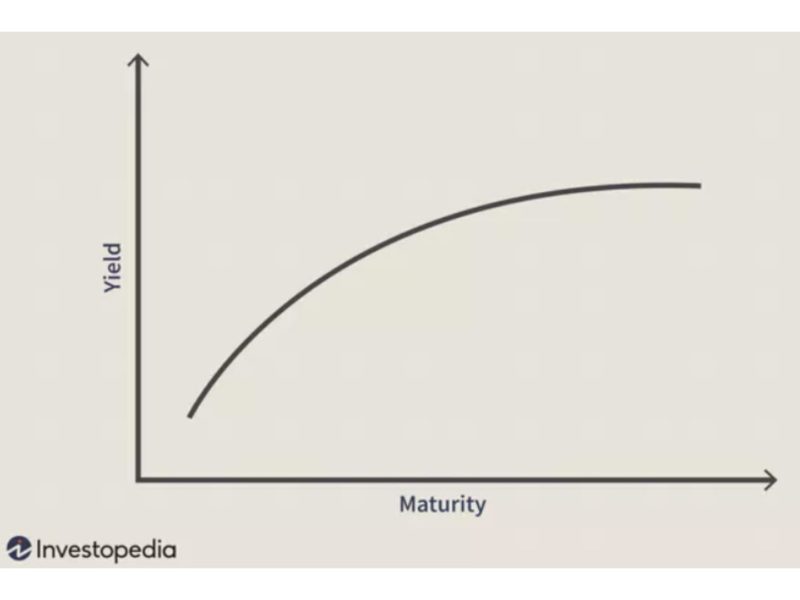 Such is life in a debt-based monetary system.

Also, a 75 basis point (bps) increase to interest rates in July is basically a foregone conclusion at this point. (For more on what that means, check out the more detailed piece I wrote two months ago). According to the Federal Open Market Committee (FOMC) June meeting minutes, almost all FOMC members were in favor of a 75 bps hike. Federal Reserve Chair Jerome Powell told us that a 75 bps hike was an “unusually large one.”

Two months in a row would seem quite usual, but that’s just me. All eyes on July 27.

The miners are struggling

We touched on how mining companies might soon capitulate by selling some of their balance sheet bitcoins to fund operations as they struggle, given 2022 price-performance mentioned in last week’s newsletter. And just like that one of the largest miners, Core Scientific (CORZ), announced that it sold over 7,000 BTC in June. CORZ hasn’t performed well in 2022, so it’s unsurprising that they had to dip into the treasury a bit. 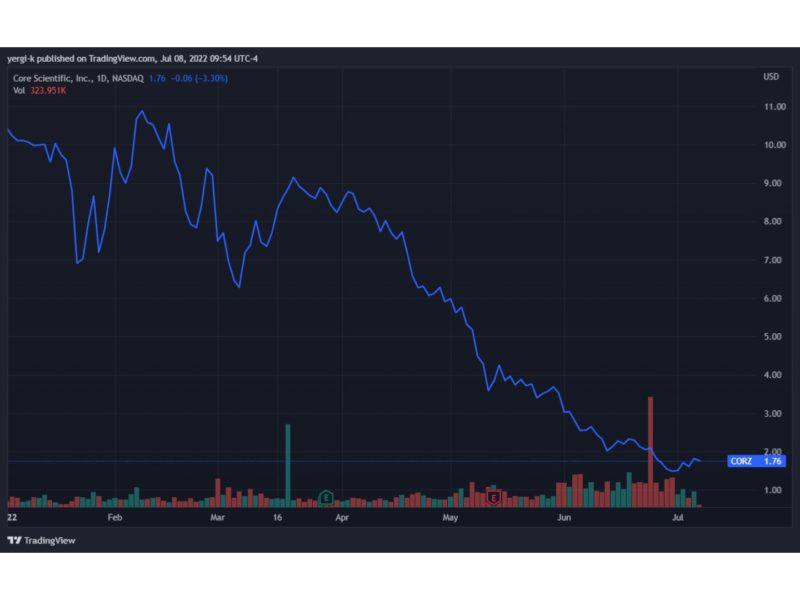 All said, while miner capitulation is viewed as the beginnings of a “death spiral to zero” (since miners are supposed to be the last line of defense), that isn’t happening in reality.

Core Scientific CEO Mike Levitt assured investors the company is focused on executing its plans and the sale was just an exercise in maintaining a healthy balance sheet. To its credit, CORZ didn’t have to disclose that it sold anything given its earnings call isn’t until August.

If anything, we should applaud the transparency.

The crypto lenders are not having a good time

Lastly, leverage continues to hurt everyone. The Luna collapse led to the Three Arrows Capital insolvency, and now we are facing a crypto lender crisis. BlockFi received a structured bailout from FTX with what seems to be $215 million in earnout, Celsius halted operations and then announced some restructuring plans, and Voyager did the same-same-but-different by declaring bankruptcy.

On top of that, it came out on Friday that Blockchain.com might lose $270 million from lending to Three Arrows Capital. It’s tough sledding out there.

The news is still unfolding with all these lenders. In general, this is all “not good,” but it does feel like the worst is behind us. FTX and its ever-altruistic CEO Sam Bankman-Fried is emerging as crypto’s savior as his or his firm’s name has popped up in all discussions around companies who are failing in the embers of the Three Arrows insolvency.

So in general, all these things – an inverted yield curve, higher interest rates, miner capitulation, and multiple crypto lender bankruptcies – are not good. What is going to be most interesting here is seeing what happens to bitcoin and crypto during these hard times. Not only is life tough in the crypto world, but macro markers are signaling a recession.

And although it was birthed out of a recession, bitcoin has never lived through one. It will, at the very least, get interesting. Thankfully (or unthankfully) things are happening quicker than I’m used to (I used to work in finance/TradFi).

The interesting thing is seeing what bitcoin will do in the times of hard macro times – which is the root of this all.

Amid all of this, here’s bitcoin last week. 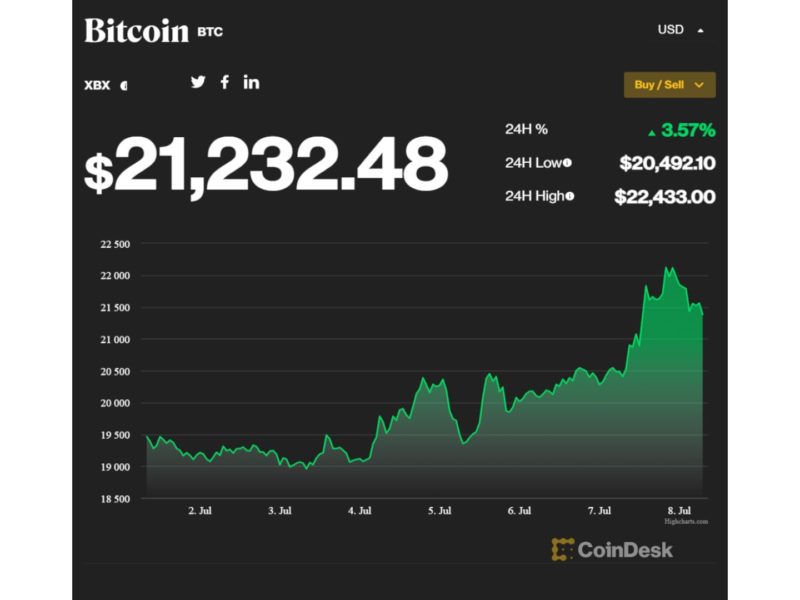 So I guess it’s going to be fine? I don’t know.