Global CBDC Race Is On

The rapid transformation of global finance resulting from the war in Eastern Europe will spur the development of central bank digital currencies – CBDC – in the months to come.

We have already written several times about how the war has drastically accelerated the mass adoption of cryptocurrencies. But no state wants to lose control over finance, which pushes authorities to counteract independent cryptocurrencies with their digital fiat analogues. Moreover, CBDCs of different countries will become a weapon in the struggle for economic advantage in the new financial reality.

Russian statesman, political and public figure Yurii Krupnov has recently claimed that “We need to pay attention to Central and Southeast Asia. It is a very important market, a colossal self-sufficient market.” Also, according to him, Russia should be planning to introduce its digital currency. “There should be a digital industrial ruble, which would allow us to trade with foreign countries, as well as finance and lend to our industries,” said the expert, considered the voice of the Russian government.

The Chamber of Commerce and Industry of the Russian Federation has echoed his sentiment: “Additionally, the digital ruble must be fully launched as soon as possible. And do not forget about the possibilities of cryptocurrency. With this tool, we can overcome any American sanctions. We already know how to use crypto for settlements, we have worked out the whole procedure and documented it in our proposals …” – their statement said.

And so, the position of Russia (and therefore also Belarus) is now as follows: use their own CBDC and cryptocurrencies to bypass financial sanctions.

However, the latter option is clearly a non-starter at the state level and for government-related businesses. US senators have already introduced bills that would force crypto exchanges to sever ties with Russian wallets.

Namely, the US Treasury Department will get the right to strip American exchanges of their license for servicing Russian clients. And not just the persons from the sanctions list – it will be a total ban on operations with Russian addresses. Furthermore, even regular American taxpayers will be required to report all crypto transactions outside the country in excess of $10,000 to the Financial Crimes Enforcement Network (FinCEN).

That leaves the digital ruble, Russia’s own CBDC they are looking to rush into existence. And they can create it, of course, any fifth-grader today is able to make their own cryptocurrency. The difficulty is in implementation.

As we see in the statements above, China and its affiliated states will become Russia’s main trading partners in the context of Western sanctions. But China has its own CBDC – the digital yuan (denoted as DCEP), which it has already successfully tested and is now actively enforcing. In this regard, the country is far ahead of all its global counterparts. A year ago, officials from the People’s Bank of China (the country’s central bank) stated that one of the tasks for DCEP is to become the world’s reserve currency – one of those used in international trade.

The image below shows the current layout of world reserve currencies. 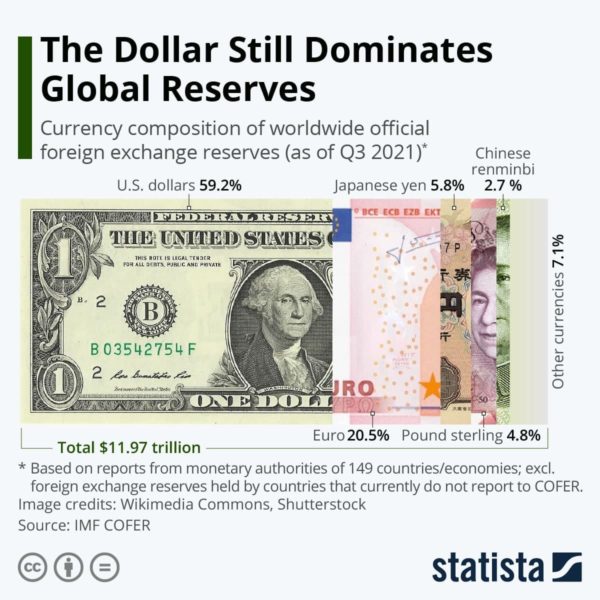 You see the yuan there, though it is only 2.7%. But there is no Russian ruble at all. So now, as Russia finds itself in a tight spot, it most likely will be forced to trade with China and its satellites using the digital yuan, not rubles. Beijing simply won’t accept any other option.

And Russia won’t be the only one adopting DCEP – Saudi Arabia is now negotiating with China to sell oil for digital yuan instead of dollars (used currently in 80% of such transactions). Negotiations have intensified this year in light of Riyadh’s unhappiness with Washington’s security commitments, including the US intervention in the civil war in Yemen and their talks on re-entering a nuclear deal with Iran. The resulting potential transition to yuan in oil settlements could weaken the US currency in favor of the Chinese one.

We obviously won’t have to wait long for Washington’s response – I predict we will see the digital dollar by the end of the year. It’s vital for the US not to lose to China in the global state digital currencies race – and right now, Beijing is skillfully using the Russo-Ukrainian war to consolidate its leadership in the field of CBDC.

Europe, for its part, will likely end up in third place at best. Yes, the euro’s share of the world reserves is 20.5% and about the same in international settlements. But even now, in wartime, the European bureaucracy is too cumbersome to make decisions on the scale of launching a single European CBDC. It’s a pity, really. Personally, I’m not looking forward to choosing between China and the United States.