Most Ethereum 2.0 stakers are currently not in profit amid the bear market

After Ethereum’s price declined above 78% since November’s all-time high, just 17% of Ethereum 2.0 stakers are currently in profit, the Glassnode report revealed. Also, the number of deposits into the Ethereum 2.0 contract has fallen in the last few months.

According to the latest report from blockchain analytics firm Glassnode, Ethereum 2.0 stakers are suffering from the ongoing bear market, with most of them being “firmly underwater” now on their positions.

As the second-largest coin had hit the all-time high of $4,891 last November, the total dollar value of staked Ethereum back then reached an impressive $39.7 billion.

Since then, the prolonged crypto rout brought Ethereum to the current levels of around $1,200, and the value of the Ethereum 2.0 smart contract plunged to about $25.65 billion, 65.2% down from nine months ago. And all this is despite an additional inflow of nearly 5 million ETH since the November peak, as researchers noted. 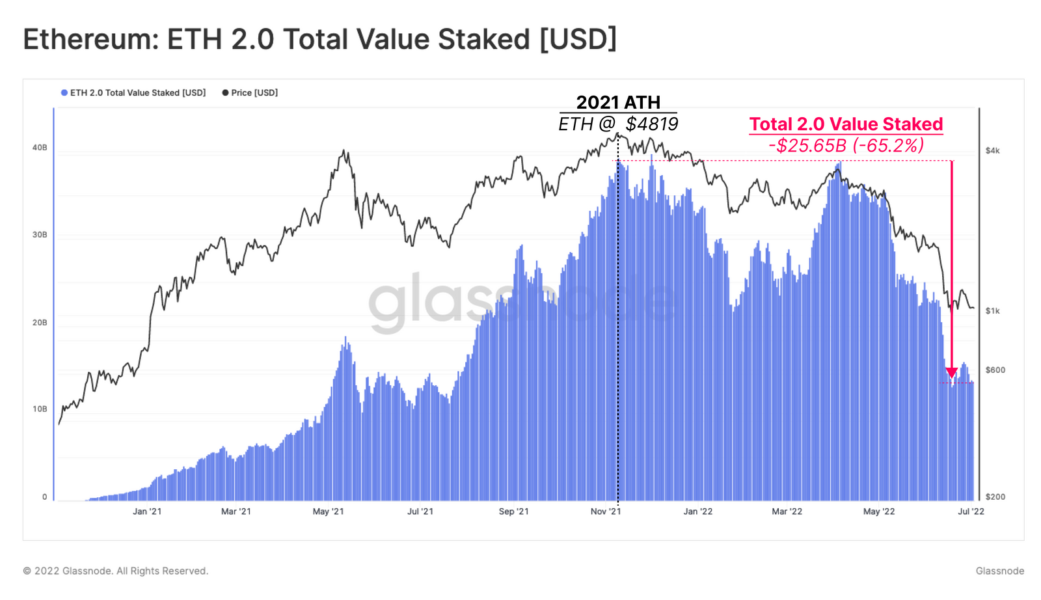 “With ETH prices collapsing over 78%, and coins unable to be withdrawn, only 17% of staked ETH is now in profit,” the report said.

This also means that Ethereum 2.0 stakers on average are holding at a loss of about 55%.

According to the report, “if we compare this to the Realized Price for the entire ETH supply, 2.0 stakers are currently shouldering 36.5% larger losses compared to the general Ethereum market.” As per Glassnode, 62% of all staked Ethereum have been deposited before the November all-time high.

The long-awaited Ethereum’s transition from a proof-of-work (PoW) to a proof-of-stake (PoS) consensus mechanism due to The Merge upgrade will also change how transactions on the network are validated. Following the transition, transactions will be added to blocks by stakers – addresses that have pledged a minimum of 32 ETH to a smart contract.

Currently, Ethereum has a PoS-based chain called the Beacon Chain, which was launched in December 2020 and is running in parallel with the network’s current mainnet.

Since then, investors have been depositing their coins to operate as validators, with the amount of staked ETH reaching an impressive 12.98 million tokens, or approximately 11% of Ethereum’s circulating supply.

Noteworthy, the number of deposits into the Ethereum 2.0 contract has fallen in the last few months.

As reported earlier, Ethereum’s main public testnet, Ropsten, which allows for blockchain development testing before deployment on the mainnet, has undergone “The Merge” on June 8 in preparation for the main Ethereum blockchain to switch to proof-of-stake consensus.