Stablecoins and the World Post-War

Stable cryptocoins pegged to fiat currencies have long been justly criticized “on both sides” – both by adherents of “traditional” crypto and devout opponents of cryptocurrencies. But the rapid changes to the economic reality have turned stablecoins into the most highly sought-after financial tool.

The amount of USDT issued on the TRON network has recently exceeded $40 billion and overtook USDT on Ethereum, an event that has massive implications. It means that small retail transactions with this stablecoin are now much more popular and common than large business settlements. 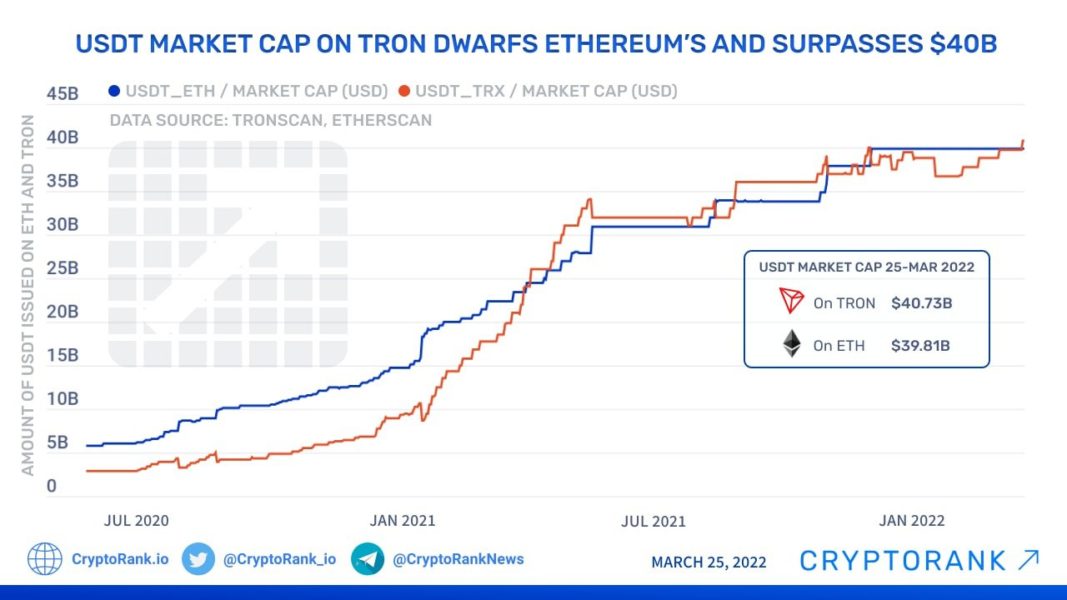 Yours truly, by the way, has experienced it himself: since the first days of the war in Eastern Europe, I have mainly been using USDT on TRON, even though my multi-currency crypto wallet holds BTC, LTC, ETH, and more.

As I have written on multiple occasions now, the wartimes have spotlighted all cryptocurrencies. But today, it is stablecoins that are on the frontlines – in every sense of the term.

According to CryptoRank, in March, the stablecoin market hit a new ATH, reaching $187 billion in capitalization – an increase of more than 10% since the start of the year. Despite some volatility, the stablecoin supply also increased by $5.9 billion over the past month.

Numbers indicate Tether (USDT) to have the highest market capitalization of all stablecoins. With a 2% daily growth, it reached $80 billion by mid-March, representing 4.46% of the entire cryptocurrency market.

It comes as no surprise that Ukraine and Russia demonstrated the highest rates of increase in purchases of USDT and other stablecoins over the past month. The reasons are simple, though they differ for the two countries. In the first week of the war, Ukrainians rushed to trade hryvnias for USDT, not knowing what would happen to the exchange rate in the future. Afraid of hyperinflation, they were desperate to keep their savings in dollars before the potential devaluation of their national currency.

But, credit to the financial authorities of Ukraine, they kept the country’s monetary system intact, the hryvnia fell only slightly, banks and exchangers work, as does the cashless payment system. Moreover, on March 16, after the war had already begun, the president signed the long-awaited law on cryptocurrencies. As a result, around mid-March, the fever subsided, and Ukrainian citizens stopped stacking up on stablecoins. They were still used quite actively, though, in large part due to several million Ukrainians fleeing the war and going abroad. Without accounts in Western banks (or even with them), stablecoins proved the fastest and most convenient way to conduct transactions with their compatriots still in Ukraine.

Russia is an entirely separate case. As the ruble collapsed against the dollar and the euro, USDT and other stablecoins have been a lifesaver for those lucky ones who quickly realized what was happening.

The rest had to buy stablecoins at new, horrendously high (in rubles) prices. Nevertheless, for lots of Russian citizens, it was the only choice. International sanctions and their government’s edicts made it extremely difficult to buy the main foreign currencies for rubles. And even having dollars or euros doesn’t mean that you can take them out of the country, a necessary condition for many people with money now striving to leave Russia. For those Russians, stablecoins became a loophole to bypass the ban on currency export.

So, what does the future hold? From an economic point of view, the crisis caused by the war will inevitably create a domino effect in various industries, strengthening the position of cryptocurrency. More than a tool for helping average Ukrainian or Russian families, stablecoins – USDT, USDC, BUSD, UST, DAI, and others – will serve as a safe haven from the fallout of the current situation and the precarious financial environment to come. After all, the war (especially if it spreads to new countries and regions) will mean a transition from individual bankruptcies to the default of entire banking systems. Such a scenario would create even more distrust in centralized banks, paving the way for further adoption and recognition of digital assets and crypto. Stablecoins will then act as a bridge for people without previous cryptocurrency experience to switch to genuinely independent and decentralized cryptocoins (like Bitcoin or Ethereum), with all their volatility and complexities – but also real freedom.

Given that, we will certainly look back at today’s rise of stablecoins as one of the main trends of the year. Of course, at some point, all the crypto newbies are bound to figure out that despite presenting certain advantages for investors (especially during periods of high cryptocurrency volatility), stablecoins – no matter what their annoying ads are saying – are not entirely risk-free investments.

Strictly speaking, the term “stablecoin” itself is not entirely correct. It only indicates the stability of the price, pegged to a fiat currency (usually the dollar) or, say, gold. The operational stability and even the existence of any stablecoin are a different matter. There are actually quite a lot of risks involved – from centralized management making them vulnerable to regulators to the, let’s say, insufficient backing of stablecoins with liquid assets.

However, all those topics are for a separate discussion.

fiat money Stablecoins USDT war
You May Also Like