Luxury brand Tiffany & Co. has jumped into the NFT world with a collection of limited edition Ethereum-based tokens and corresponding CryptoPunks-themed jewelry. Priced at 30 ETH, or about $50,000, the 250 pieces sold out in around 20 minutes, bringing in more than $12.5 million.

On August 5, the world-famous luxury jeweler launched its first NFT collection, a series of 250 CryptoPunks-inspired digital passes dubbed “NFTiffs.” The NFTs were priced at 30 ETH, around $50,000 at today’s prices. The collection sold out in around 20 minutes, bringing in over $12.5 million. Tiffany & Co. launched the collection on the Ethereum blockchain via Chain Protocol.

NFTiffs are digital passes that CryptoPunk NFT holders can redeem for a digital artwork based on their original Punk. Each piece of digital art will be accompanied by luxury pendants in the same design. The pendants will themselves be luxury items, made of gold and precious stones carefully selected to correspond with each of CryptoPunks’ various traits. They’re expected to ship in early 2023. 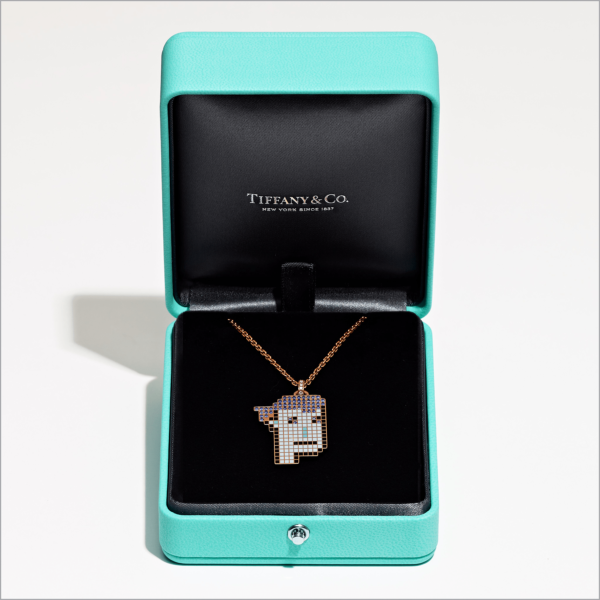 Tiffany & Co. announced its “NFTiffs” last week, which, unlike their NFT cousins, are physical art objects. The legendary little blue box jeweler said it would be producing 250 custom-designed CryptoPunk pendants, which will only be available for purchase by the owner of the corresponding CryptoPunk NFT. The piece will feature an 18-karat rose or yellow gold chain, while the CrytoPunk emblem is made with precious gemstones and/or diamonds, the company said.

While anyone could buy an NFTiff, only CryptoPunk holders are eligible to redeem them for digital art based on their Punk and a corresponding fine jewelry pendant. To do so, redeeming wallets need to hold an NFTiff and a CryptoPunk to model the new artwork on. NFTiffs must be redeemed by August 12.

There are a total of 10,000 CryptoPunks, so not everyone who wants to show off their NFT in diamonds may be able to. In addition, Tiffany restricts CryptoPunk owners to three purchases, even if they own more NFTs. In its FAQ section, the company said that it expects to ship pendants in early 2023.

The most expensive CryptoPunk NFT was sold for $11.8 million among works of other artists during a Sotheby’s virtual auction in June 2021. The CryptoPunk NFT was the favorite of the auction among 27 other digital works. Later, Visa bought one of CryptoPunks for nearly $150,000 in August last year.

This March, Yuga Labs, the company behind one of the biggest and most valuable NFT collections in the industry, the Bored Ape Yacht Club, has bought the rights to the intellectual property of popular collections – CryptoPunks and Meebits – from Larva Labs.

Despite a bearish attitude in the crypto market, the NFT sector has shown some resilience over the last year, with several established brands making moves to establish a footing in the space. Tiffany & Co. is just one of many luxury brands to leap into Web3 in recent months, with notable others including Gucci and Louis Vuitton.