Lessons from the crypto crash: Just like in the aftermath of the dot-com bust, the crypto market now has to trim the fat, writes Axel Nussbaumer on Cointelegraph.

The economist Benjamin Graham, known to some as the father of value investing, once compared the market to a voting machine in the short run and a weighing machine in the long run. While Graham likely would have been skeptical at best about crypto and its built-in volatility had he lived to see it, his economic theory nevertheless applies to certain aspects therein.

Since the emergence of altcoins, the blockchain space has operated almost exclusively as a “voting machine.” Many projects have, by and large, been financially unsuccessful and even detrimental to investors and the space at large. They have, instead, turned crypto into a memelord popularity contest, and their success on that front can hardly be understated. Sometimes that competition is based on who promises the best future use case — but whether that future actually arrives is another issue altogether. Often it’s based on who markets themselves best, through sophisticated-looking infographics or ridiculous token names and a series of associated “dank” memes. Whatever it is, the success of the majority of projects is based on speculation and little else. This is what Graham was referring to as that “voting machine.”

So, what’s wrong here? Many prescient people have made life-changing money while playing the game, and the constant talk of funding and building potentially world-changing decentralized tech is the norm, so it seems like the space could be an ideal environment for founders and developers, right? It isn’t. These successes have often come at the expense of unsophisticated, desperately misguided investing rookies. Furthermore, most of that value ends up in the hands of the ubiquitous so-called vaporware merchants who propagate little more than misplaced value and broken promises. So, where is Graham’s weighing machine, and when will it start to enact its force? As it happens, right now.

The crypto crash vs. the dot-com bubble

The dot-com bubble is an ideal historical precedent for our purposes. The two spaces share an exuberance to shoehorn developing tech into problems that don’t exist, excessive access to capital, ambitious promises with no hard tech backing them, and finally, a gross misunderstanding of what any of this is even about on the part of the investor (see the domain claims for pets.com, radio.com, broadcast.com, etc.) 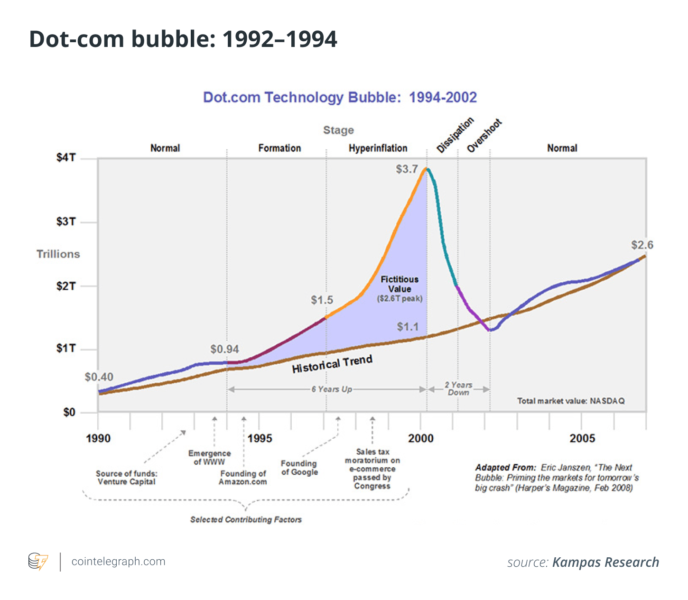 Why did those companies ever even gain favor? Simply because they had obvious names. If the brunt of investors don’t understand what they’re buying but want to join the party, why not pick a point-blank name?

What’s more, the numbers are uncannily similar. Let’s put these in perspective:

Inflation will skew these slightly, but take a moment to consider that Apple alone is at a market cap of $2.45 trillion at the time of writing. A single tech sector stock has the same market capitalization as all of crypto and half of the dot-com sector when adjusted for inflation. 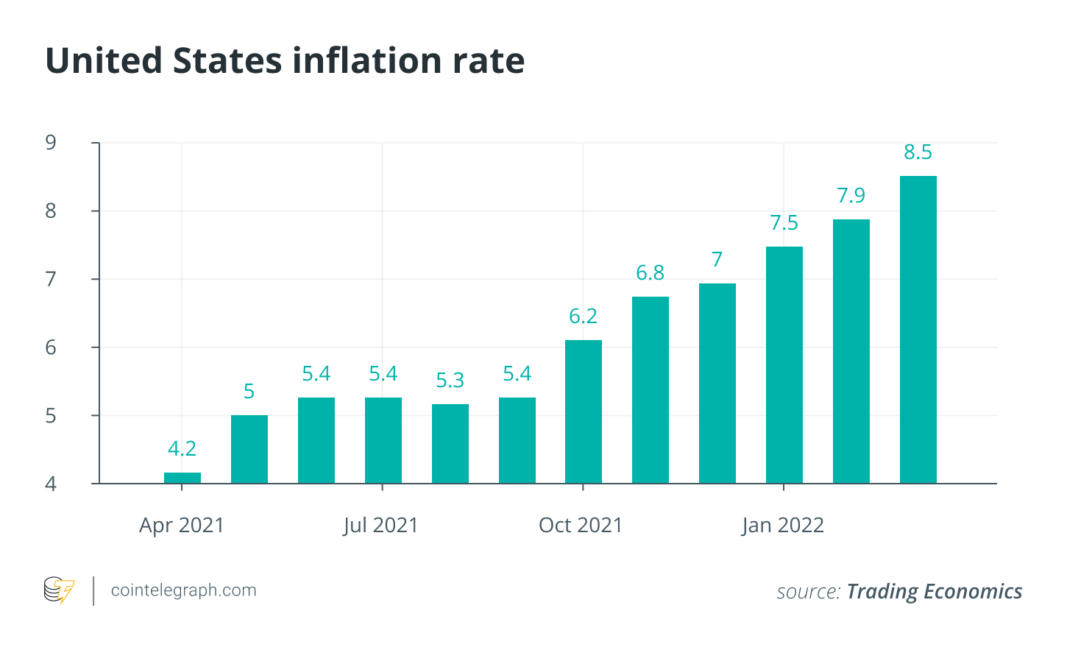 As gloomy as that downturn seems, it’s not a tragedy. Imagine knowing the market bottom had been reached for the tech sector in, say, 2003. People were convinced the tech sector was on its last legs. Sure, the numbers above could (and should) be taken with a heavy grain of salt, and one could remember that history does not always repeat itself exactly — instead, it rhymes. Since entering the blockchain space in 2016, I’ve watched it move faster than nearly every other financial sector. The required patience to wait out a crypto downturn requires far less fortitude than the waiting period between 2003 and 2010.

In the past few months, crypto has simultaneously drawn the shortest straw from macroeconomic forces and experienced another “black swan event” like Mt. Gox, the 2017–2018 crypto winter and the 2020 crash. This time around, it was the Terra crash.

Each of these events spelled doom, ruin, plague and death for the average investor; yet somehow, developers continued to develop, miners and node operators continued to operate, and smart money continued to buy. (Funds like a16z, StarkWare and LayerZero raised about $15 billion combined fairly recently). Why? Emotional decisions that influence one group don’t necessarily influence all the others. One of these data sets is subject to it, while the other has conquered it. These are individuals and entities who do not feel bad about beating you. They do not feel bad for making you lose money. They do not feel anything until they’ve realized a loss — full stop. In other words, emotion inherently must be removed from the equation with respect to decision-making.

How the Terra saga affects you, and what comes next

Chances are, the Terra crash will continue to wreak havoc on your portfolio and peace of mind. Meanwhile, the ever-present stoic investors rear their ugly head, having sold the top just weeks ago and letting you plummet to a 70% loss. But don’t panic. Look at the history of the internet, and consider this instead. It’s hard to say precisely where we are in the market adoption cycle of crypto and how far we are from when it truly trims the fat. However, it does seem like we are very close, and things are moving much faster than the dot-com sector did. 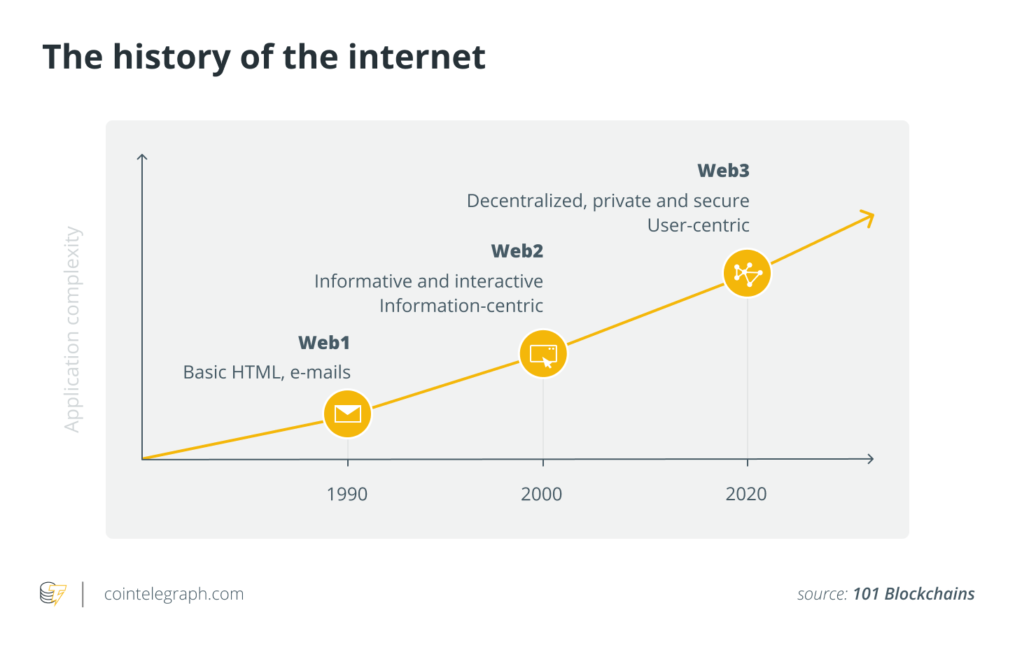 All this makes for a reasonably straightforward framework for some intelligent long-term investment strategies — especially if you pay attention to the way in which more and more average users adopt Web3. If broadband was the inciting incident that led to massive user growth, I would argue an easy-to-use Web3 wallet that requires no setup to interact with numerous blockchains will be crypto’s analogous incident. Interestingly enough, Robinhood recently announced it would be releasing a simple-to-use Web3 wallet really soon. Once a solution like that comes along that allows for Web3 interaction with just a few clicks, the floodgates will completely open.

From there, it’s a matter of determining what the blue chips sitting at the top 20–30 market capitalizations of crypto will be, and then buying and simply being patient. The problem is that there are no guarantees, except in hindsight, and the closer a market approaches the point of maturation, the less upside is available to the investor. The most prudent thing to do is to take your time and approach investing in a new space like this with a clear, defined strategy.