Crypto advocates often refer to Bitcoin as “digital gold,” but how does BTC stack up against gold as a long-term investment? — a study compiled by Jordan Finneseth of Cointelegraph.

The emergence of forty-year high inflation readings and the increasingly dire-looking global economy has prompted many financial analysts to recommend investing in gold to protect against volatility and a possible decline in the value of the United States dollar.

For years, crypto traders have referred to Bitcoin (BTC) as “digital gold,” but is it actually a better investment than gold? Let’s take a look at some of the conventional arguments investors cite when praising gold as an investment and why Bitcoin might be an even better long-term option.

One of the most common reasons to buy both gold and Bitcoin is that they have a history of holding their value through times of economic uncertainty.

This fact has been well documented, and there’s no denying that gold has offered some of the best wealth protection historically, but it doesn’t always maintain value. The chart below shows that gold traders have also been subject to long bouts of price declines. 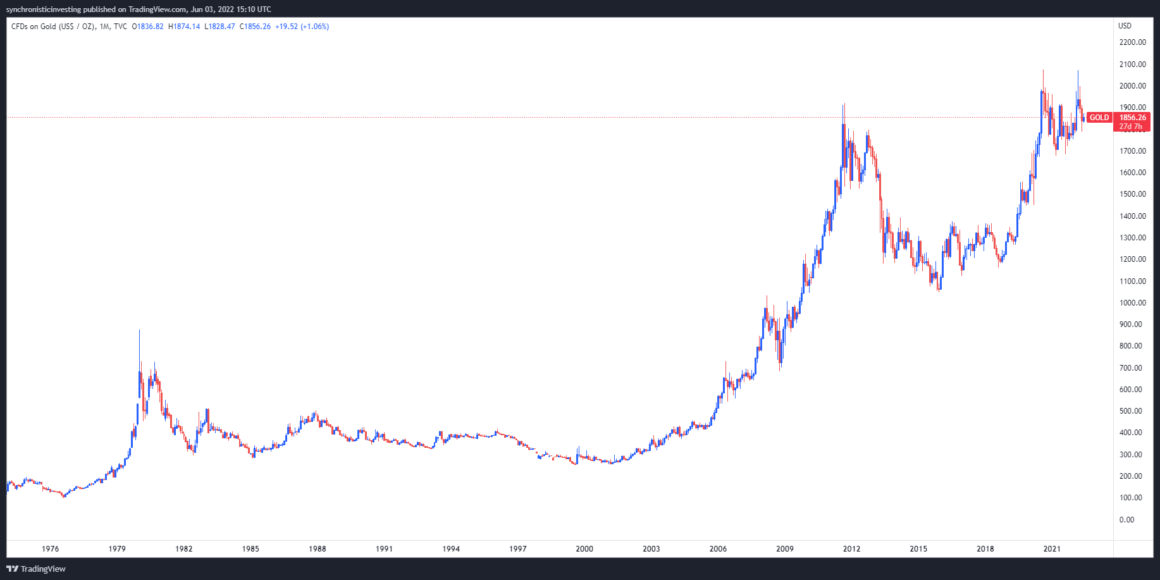 For example, a person who bought gold in September of 2011 would have had to wait until July 2020 to get back in the green, and if they continued to hold, they would once again be near even or underwater.

In the history of Bitcoin, it has never taken more than three to four years for its price to regain and surpass its all-time high, suggesting that on a long-term timeline, BTC could be a better store of value.

Could Bitcoin be a better inflation hedge?

Gold has historically been seen as a good hedge against inflation because its price tended to rise alongside increases in the cost of living.

But, a closer look at the chart for gold compared with Bitcoin shows that while gold has seen a modest gain of 21.84% over the past two years, the price of Bitcoin has increased 311%. 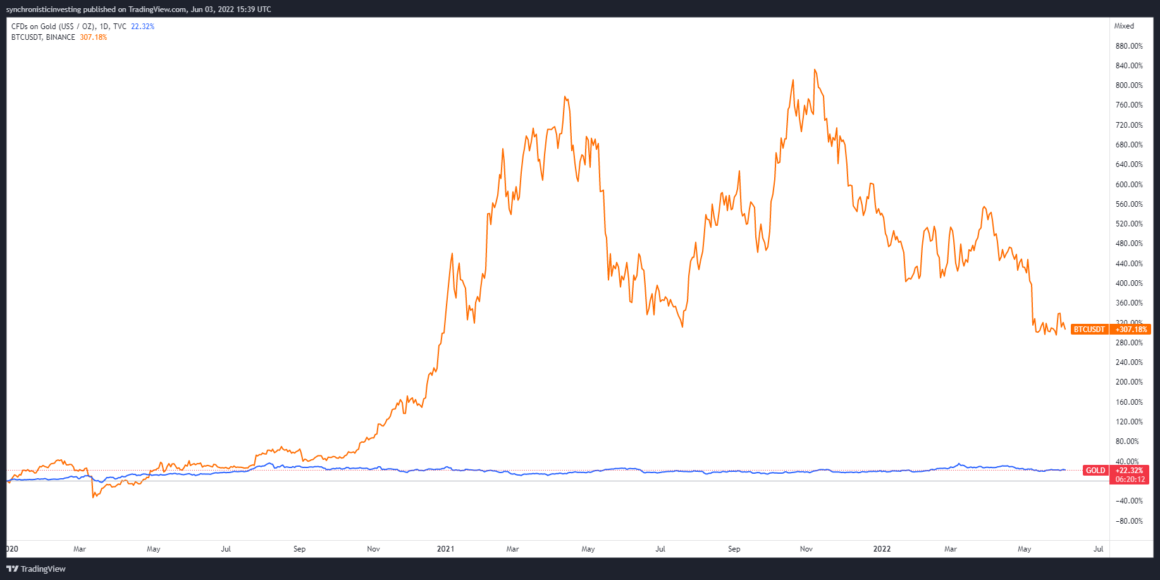 In a world where the overall cost of living is rising faster than most people can handle, holding an asset that can outpace the rising inflation actually helps increase wealth rather than maintain it.

While the volatility and price declines in 2022 have been painful, Bitcoin has still provided significantly more upside to investors with a multi-year time horizon.

Often called the “crisis commodity,” gold is well-known to hold its value during times of geopolitical uncertainty as people have been known to invest in gold when world tensions rise.

“Gold is called the crisis metal so I’d assume if we enter into a recession again, gold will go up as a commodity” — Scott Hempstead (@scottytrip1) April 22, 2022.

Unfortunately for people located in conflict zones or other areas subject to instability, carrying valuable objects is a risky proposition, with people being subject to asset seizures and theft.

Bitcoin offers a more secure option for people in this situation because they can memorize a seed phrase and travel without fear of losing their funds. Once they reach their destination, they can reconstitute their wallet and have access to their wealth.

The digital nature of Bitcoin and the availability of multiple decentralized marketplaces and peer-to-peer exchanges like LocalBitcoins provides a greater opportunity to acquire Bitcoin.

The US dollar has been strong in recent months, but that is not always the case. During periods where the dollar’s value falls against other currencies, investors have been known to flock to gold and Bitcoin.

If various countries continue to move away from being US dollar centric in favor of a more multipolar approach, there could be a significant amount of flight out of the dollar but those funds won’t go into weaker currencies.

While gold has been the go-to asset for millennia, it’s not widely used or accepted in our modern digital society and most people in younger generations have never even seen a gold coin in person.

For these cohorts, Bitcoin represents a more familiar option that can integrate into people’s digitally-infused lifestyles, and it doesn’t require extra security or physical storage.

Bitcoin is scare and deflationary

Many investors and financial experts point to scarcity and supply constraints for gold following years of declining production as a reason gold is a good investment.

It can take five to ten years for a new mine to reach production, meaning rapid increases in supply are unlikely and central banks significantly slowed their rate of selling gold in 2008.

That being said, it is estimated that there is still more than 50,000 metric tons of gold in the ground, which miners would happily focus on extracting in the event of a significant price increase.

“Gold will never reach the promised land of ‘true scarcity’.  The more the price inches up, the more it is mined, thus increasing supply, which then lowers the price.” — DeepSee-er (@ErDeepsee) March 7, 2022.

On the other hand, Bitcoin has a fixed supply of 21 million BTC that will ever be produced, and its issuance is happening at a known rate. The public nature of the Bitcoin blockchain allows for the location of every Bitcoin to be known and verified.

There’s no way to ever really locate and validate all of the gold stores on this planet, meaning its true supply will never really be known. Because of this, Bitcoin wins the scarcity debate, hands down, and it is the hardest form of money created by humankind to date.