Amid confusion over intellectual property (IP) rights, VC giant Andreessen Horowitz (a16z) is releasing a free licensing system for NFTs to address current challenges and ambiguities over the use of crypto collectibles. With help from Punk6529, the new licensing system attempts to standardize options, aiming to help the NFT sector fulfill its “economic potential.”

The crypto unit of Silicon Valley Andreessen Horowitz (a16z) says that the new project is inspired by the Creative Commons (CC), which provides for different levels of permission that creators and copyright holders can assign for their works. The Silicon Valley-based firm is all set to release a set of free, public “Can’t Be Evil” licenses.

According to the official press release, the community can freely use these licenses, which come with certain goals in mind. This includes – helping NFT creators protect or release their IP rights and granting NFT holders a baseline of rights that are “irrevocable, enforceable, and easy to understand.”

Helping creators, holders in the space, as well as their respective communities, to “unleash the creative and economic potential of their projects with a clear understanding of the IP framework in which they can work” is yet another key focus area of the licenses.

Miles Jennings and Chris Dixon from a16z believe that greater standardization across the sector will help in tapping the economic potential.

“By making the licenses easy (and free) to incorporate we hope to democratize access to high-quality licenses and encourage standardization across the web3 industry. Greater adoption could lead to incredible benefits for creators, owners, and the NFT ecosystem as a whole,” the authors said in the statement. 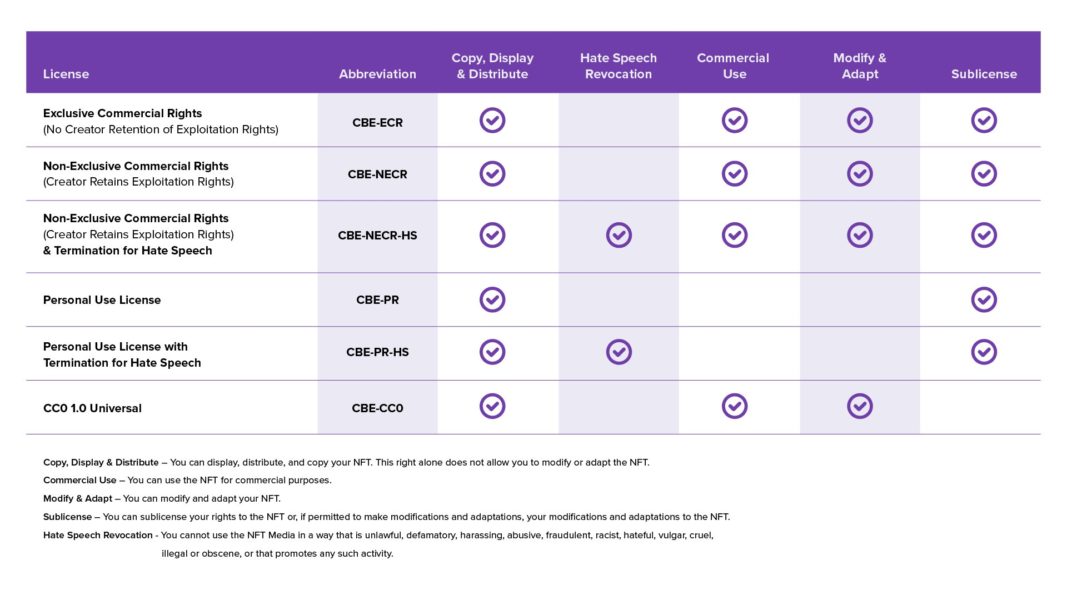 As reported, the firm engaged in talks with some of the leading IP lawyers in the Web3 space. Thus, a16z tapped Punk6529 – a pseudonymous crypto influencer known for his valuable collection and insightful Twitter threads – to help shape the licenses. It also worked with law firms Latham & Watkins LLP and DLA Piper, as well as unspecified portfolio companies.

Even as some of the most prominent blue-chip collections have brought discussions regarding NFT license agreements into the spotlight, the problems persist. Most notably, the Bored Ape Yacht Club (BAYC) grants holders the right to use their owned images to create and sell derivative artwork and products. However, there are questions over whether such IP licenses are legally durable, or if creators have misled buyers. Venture capital giant Andreessen Horowitz says it wants to help.

It is important to set some industry standards designed specifically for NFTs with the evolving Web3 innovations testing the limits of legacy legal frameworks in a similar approach to that of Creative Commons, an American nonprofit organization that establishes free copyright licenses for creators.

The new license terms have themselves been released for free via an open-source, Creative Commons Zero (CCO) license, which means they can be freely used, remixed, and forked as Web3 creators see fit.

This May, Andreessen Horowitz launched the largest-ever $4.5 billion crypto fund despite the ongoing downturn in the global financial markets. Focused on crypto and Web3, the new Crypto Fund IV is double the size of its previous fund, launched in 2021.

About one-third of the new fund will be used for seed deals exclusively to ward off competition from native crypto VC firms, Paradigm and Electric Capital, Techcrunch reported. Focused on crypto and Web3, the fund brought a16z’s total holdings to $7.6 billion.

For now, a16z has its fingers in many Web3 projects and has invested in some of the largest NFT creators, including Bored Ape Yacht Club (BAYC) from Yuga Labs, Gary Vaynerchuk’s VeeFriends project, and most recently Kevin Rose’s Proof (Moonbirds). The firm has also invested in leading marketplace OpenSea, among many others.