Bitcoin inches closer to a 10-year record, as other stats turn bullish

Right now, Bitcoin is a day away from matching a nearly 10-year-old record and Ethereum could hit a significant milestone by Q2.

The world’s first cryptocurrency Bitcoin is one day away from matching its historic 15-day win streak if its positive price movement keeps up.

In November 2013 Bitcoin posted a 15-day consistent positive price movement, the longest in its history.

₿REAKING: #Bitcoin price has increased 14 days in row — A single day away from making a historic new record! pic.twitter.com/qclJhikcds

Right now, BTC is on day 14 of its win streak, hitting four-month highs in the process.

One more day of upwards price movement will match its 2013 streak. If it continues another day after that it will set a new 16-day record.

It’s not the only bullish metric crossing into new territory.

Ethereum addresses holding at least some Ether will soon cross the 100 million mark given the current amount of wallet addresses and the historical growth rate of the metric.

According to the data, Ethereum is just 7.5 million non-zero addresses away from crossing the 100 million milestone.

Since 2019 the figure has risen by roughly 20 million per year. If that rate continues its likely non-zero ETH wallets could hit 100 million by sometime in the second quarter of 2023.

ETH hits half a million validators

Another Ethereum statistic that has continued to grow is the count of its validators — entities responsible for validating transactions made on the blockchain.

It comes as the Shanghai hard fork slated for March would — among other updates — allow validators to finally withdraw their ETH which was staked so they could help validate the network.

The United States is the most accepting country for those who want to splash their crypto on purchases.

More than half of the companies from a list of 250 accepting crypto as paymen were U.S.-based according to the Jan. 14 Forex Suggest Crypto Acceptance Report, giving the country the top spot for the number of crypto-accepting firms. 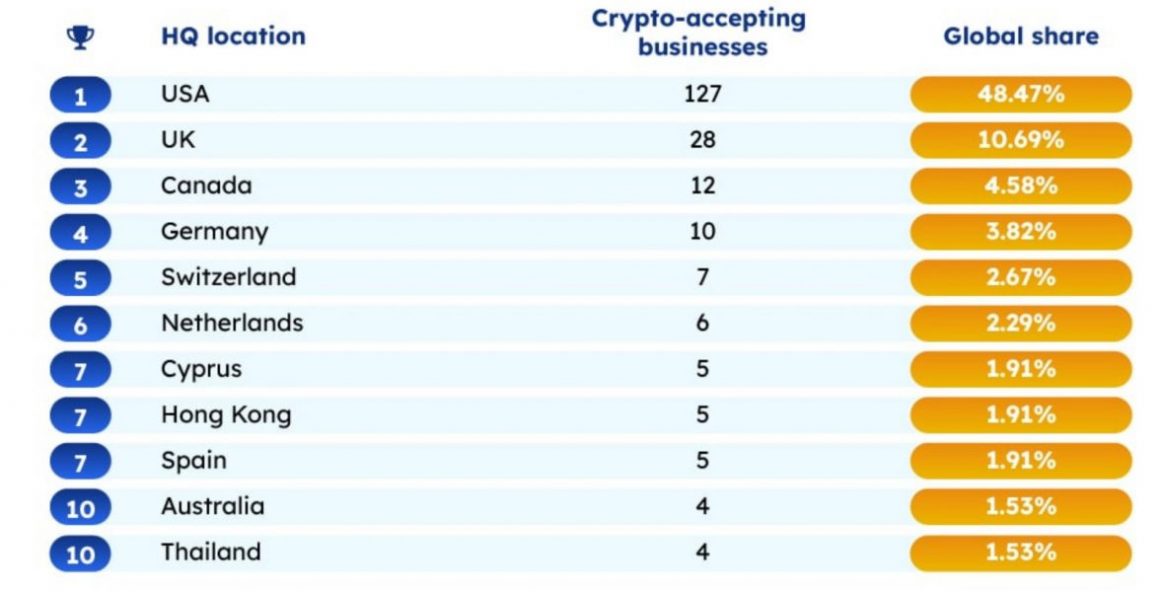 The U.S. was trailed by runner-up the United Kingdom while third place went to America’s neighbors to the north, Canada.

E-commerce was the most accepting industry of crypto closely followed by the travel industry.

The largest business by market capitalization to accept crypto was the $1.8 trillion big tech player Microsoft.

Not everything was bullish. Wrapped Bitcoin (WBTC), a tokenized and 1:1 backed version of BTC on Ethereum, has seen its supply on the Ethereum blockchain drop by 35% since May 2022.

A Jan. 17 tweet from Glassnode revealed the May 2022 all-time high of 285,000 WBTC on Ethereum came right before the price collapse of TerraLunaClassic (LUNC) and its paired algorithmic stablecoin TerraClassicUSD (USTC).