Blockchain analytics firm Chainalysis’s study revealed that the Middle East and North Africa region was the fastest-growing market for crypto adoption over the 12-month period that ended on June 30. Crypto users in the region received $566 billion in crypto from July 2021 to June 2022.

Users based in The Middle East and North Africa (MENA) region received $566 billion in cryptocurrency between July 2021 and July 2022, a 48% increase from the previous period. This growth compares with increases of 40% in Europe, 36% in North America, and 35% in Central and Southern Asia, according to Chainalysis. 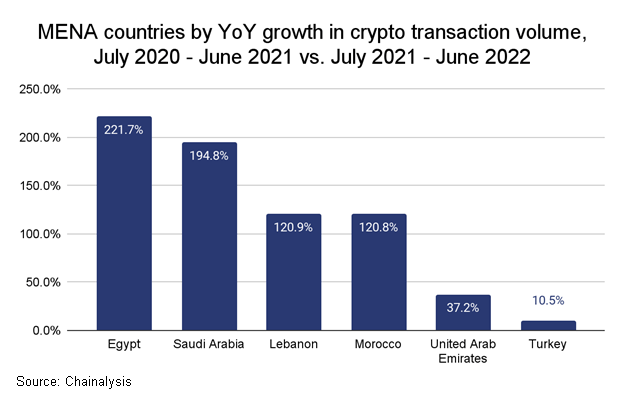 Egypt became the leader in percentage increase, where crypto transaction volume surged more than three times. Analysts noted the devaluation of the Egyptian pound by 13.5%, as well as the country’s remittance market, among the probable causes, while remittances account for about 8% of Egypt’s gross domestic product.

Turkey accounted for $192 billion of the MENA’s total of $566 billion, the largest share by one single country in the region. Chainalysis attributed that to the steep devaluation of the Turkey lira. The Middle Eastern country experienced inflation of 80.5% in the last year.

The wealthier countries of the MENA region — such as the UAE, with the crypto haven of Dubai — have also been contributors to the local crypto scene, though in a different capacity.

According to the study, both the UAE and Saudi Arabia made it into the MENA region’s top five countries in terms of received crypto value.

When it comes to these Gulf nations, however, crypto can be seen more in large institutional usage rather than P2P payments like remittances.

Meanwhile, crypto activity in Afghanistan has collapsed since last August following the Taliban’s takeover there and subsequent crackdown on the industry. The country was ranked 20th for crypto adoption in 2021, with transaction volume averaging $68 million per month before the takeover and less than $80,000 per month for now.

Adoption Chainalysis CryptoInvestments MENA MiddleEast
You May Also Like