The latest data for August indicate that the summer downturn in NFT marketplaces has continued – down 45% for a month. According to The Block’s Data Dashboard, the NFT marketplace volume for August was $369.53 million, compared with $675.43 million in July.

OpenSea continues to hold its place as the dominant market leader, with $303.47 million or roughly 82% of the month’s reported volume activity, while in July, the volume was $528.64 million. Back then, the marketplace announced broad 20% layoffs due to harsh market conditions.

Downturns affect elsewhere across the NFT marketplace ecosystem. As the Solana-focused Magic Eden marked $36.17 million in volume as of August 24, which was $87.44 million in July. It clearly shows a decline of around 59% in its volume. Continuing in the list, the volume of LooksRare’s in August 2022 noted $13.51 million, which was $30.55 million this July. It also shows a decline of around 56%.

According to the Data Dashboard, on-chain trading activity for Ethereum-based NFTs was also downtrend since May.

Another data-analytic platform, DappRadar, which shows the last seven-day marketplace volume, indicates the top five marketplaces in which OpenSea leads the chart with $110.16 million of the volume of 164,744 traders. While the remaining X2Y2, Magic Eden, BloctoBay, and LooksRare follow up. 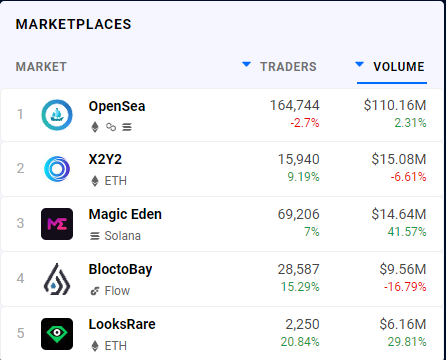 The latest decline in NFT market activity looks unsurprising, given the volume declines across broader crypto exchange services since May. That decline in activity following the May peak is reflected in The Block Legitimate Index.