The fallen value of the first cryptocurrency and the largest outflow of investors from the crypto market raise new questions. Can BTC become a widely accepted means of payment? Will it retain its role as a store of value? How does the policy of the American financial authorities play into it? And what will happen next?

I honestly have never had to go back to the same topic so often – especially one as broad as the future of the main cryptocurrency. However, it can’t be helped: just the other day, a large-scale drop in cryptocurrency prices erased more than $ 200 billion from the market in only 24 hours. Following the collapse of the TerraUSD stablecoin, Bitcoin fell 10% to its lowest point since December 2020, while Ethereum decreased by 16%. The crisis continued into the next day, as the crypto business was suffering grave losses. Hong Kong-based fintech company BC Technology Group Ltd. dropped 6.7%. Japanese Monex Group Inc., which owns the TradeStation and Coincheck trading platforms, lost 10% of its value.

But the most impressive was the collapse of one of the largest crypto exchanges – Coinbase. Its shares fell in price by 34%. Goldman Sachs has since downgraded the exchange’s stock from Buy to Neutral. They ruled that the company’s valuation is unlikely to return to prior levels if the cryptocurrency prices fail to recover after the recent decline.

For its part, Coinbase announced an adjustment to the business development strategy in the face of market stagnation. Due to declining revenue (-$430 million in Q1 2022), the company decided to slow down its hiring rate. According to one of the exchange’s top managers, they will now focus on developing previously launched projects.

On a slightly more positive note, crypto analysts seem to have finally started taking seriously the correlation of crypto rates with risky assets and the Fed tightening cycle. It was not that long ago that many believed the BTC rate only coincidentally overlapped with the stock market dynamics – a view that has now been proven categorically incorrect. That means the “crypto winter” is likely here to last, and the FRS monetary policy is to blame.

The quantitative easing (read: injection of money into the economy) carried out by the Fed since 2020 created extraordinary investment conditions when all assets grew at once – stocks, bonds, cryptocurrencies, etc. The subsequent quantitative tightening (the fight against inflation) we are living through is causing the reverse to happen. 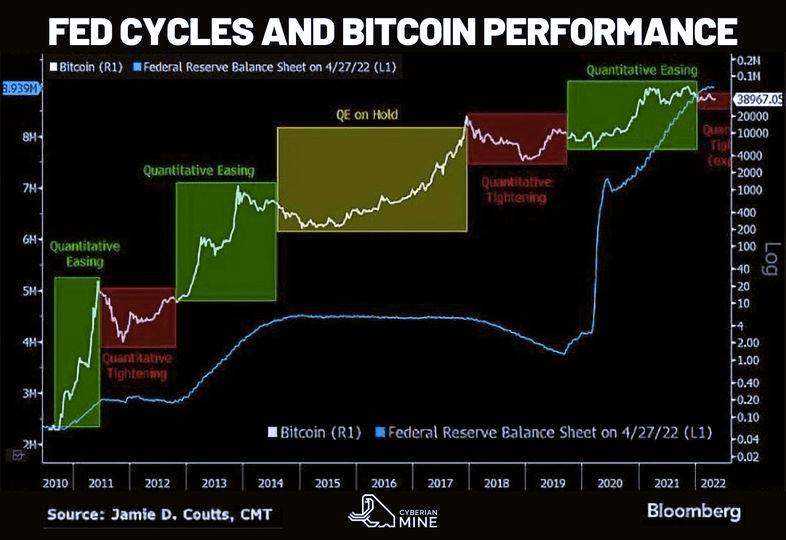 This graph shows how bitcoin’s stepwise growth correlates to the stages of quantitative easing (QE): the beginning of QE2 – November 2010, the end of QE4 – October 2014. After 2014, there is a steady climb associated with interest rates remaining low. Then, the rate hike in 2018 caused the price to begin declining. But the QE in 2020 made the cryptocurrencies rapidly go up again – until they stumbled upon the latest change in the FRS policy.

The picture is the same everywhere in the world. Global inflation has turned out to be enduring and protracted, the central banks of most countries are serious about fighting it, and as long as it remains the case, risky assets – which rightly include cryptocurrencies – will undoubtedly continue to face such difficulties as low investor activity.

This pulls the rug from under the feet of speculators and amateur investors, but, as I have written many times now, it also encourages the use of cryptocurrencies not as an investment tool, but as a means of payment.

That being said, the other day, crypto media was buzzing about the statement by Sam Bankman-Fried, the CEO of FTX cryptocurrency asset exchange, who doubted the ability of bitcoin to become a widely accepted means of payment due to the inefficiency and high environmental costs of its blockchain. In his opinion, to create a functional high-speed network, one would need the Proof-of-Stake (PoS) consensus algorithm or other newer technological developments. Even still, Bankman-Fried does not deny that BTC may retain its importance as a store of value.

The FTX founder believes that the Proof-of-Work verifying algorithm for the blockchain that underpins bitcoin cannot scale to handle the millions of transactions it would take to make the first cryptocurrency an effective means of payment. It’s hard to argue with him, but don’t forget that it was precisely for small and quick settlements that cryptocurrencies like Litecoin, Dogecoin, or Solana (as well as many others with their unique features and market niches) were created.

BTC plays a special role in that infrastructure. Firstly, as a kind of “stabilizer”, the “digital gold” against which you calibrate the rate of cryptocurrencies used for small calculations. Secondly, as a reliable tool for large transactions. When you buy a couple of oil tankers, it doesn’t matter to you whether the payment goes through in 30 seconds or in a couple of hours – just that the means of payment itself is reliable. Given that, paying with bitcoins for coffee with croissants in a roadside cafe is ridiculous anyway since it is easier and faster to use DOGE or USDT.

The President of El Salvador and other crypto enthusiasts trying to introduce BTC into wide circulation, install bitcoin ATMs, etc., seem to be making this same mistake – they fail to capture the scale. To make a loose comparison, during the Middle Ages or the Renaissance, gold coins were minted and used – but no one bought a loaf of bread in the market or a meal in a tavern for golden ducats. Instead, a small copper coin sufficed (the modern equivalent would be something like DOGE). For a cow, a horse, or a dozen goats, they paid in silver coins (in today’s terms – LTC, which creators themselves called “digital silver”). But to buy a knight’s armor, build a castle, or equip a trade expedition, one needed gold coins (in our analogy – BTC).

Unsurprisingly, a recent study by scientists in the US found that bitcoin in El Salvador was hardly used for daily settlements, despite various measures encouraging people to do so. The lesson here: If you want to legalize cryptocurrencies as a payment tool, do all at once, as was the case in Cuba.

Sam Bankman-Fried also reasonably noted that bitcoin mining is a growing concern for environmentalists due to the large amounts of energy required to run PoW-based cryptosystems. It is no coincidence that European regulators have called for a ban on PoW blockchains due to high (and mostly purposeless) carbon emissions. BTC mining already consumes more energy than countries like Norway or Sweden – our planet simply cannot afford such wastefulness.

But despite his skeptical view of bitcoin, Bankman-Fried nevertheless considers the most prominent digital asset to have a place in the crypto market. “I don’t think bitcoin should go,” he said, adding that the coin has a future as an asset, commodity, and store of value, akin to gold.

And hey, there are more optimistic views on the future of the first cryptocurrency! Prominent investor, founder of the Miller Value Partners fund, and Opportunity Equity and Income Strategy fund manager Bill Miller declared that he remains optimistic about bitcoin despite the recent decline. In an interview with CNBC, he confirmed that he owns “a large amount” of BTC and didn’t sell any.

Commenting on the hit crypto investors had taken the week before, the financial savant said: “If people have lost a lot of money on crypto, they have been speculating on things they know nothing about. Most cryptocoins created since 2017 have faded away. Other than BTC, everyone has competitors, including Ethereum.”

According to Miller, it is now worth investing 1% of your liquid capital in bitcoins, especially for residents of countries like Venezuela, Argentina, Lebanon, Turkey, Nigeria, Iraq, Ukraine, and Russia. Miller also used to call BTC “insurance against financial disasters”.

It seems that 2022 will put everything in its place – and reveal the true value of every crypto asset.

Bitcoin blockchain finanace payment system ВТС
You May Also Like