Over 50% of Bitcoin addresses are still in profit despite drawdowns

Data from blockchain analytics firm Glassnode reveals that more than half of Bitcoin wallet addresses are still in profit, raising questions about the severity of the current market sell-off as Bitcoin fell below $20,000 over the last weekend. Despite Bitcoin bouncing back by Tuesday to over the $21,000 level, Morgan Stanley and Goldman Sachs warned that recession risks still were “not fully priced in.”

As of June 20, 56.2% of wallet addresses were still worth more in US dollar terms than when their coins entered them, Glassnode revealed.

After BTC fell to 19-month lows of $17,600 on Saturday, analysts bracing for what they assume will turn out to be a retracement of up to 84.5% from all-time highs. However, a sense of confusion reigns this year thanks to those highs not being “high enough” compared to historical bull market tops.

The subsequent drawdowns seen this year have taken many analysts by surprise, despite so far not matching previous bear markets. BTC price bottoms have tended to coincide with less than half of addresses remaining in profit, and as such, the current downtrend still has a way to go if it is to fit in with historical patterns. 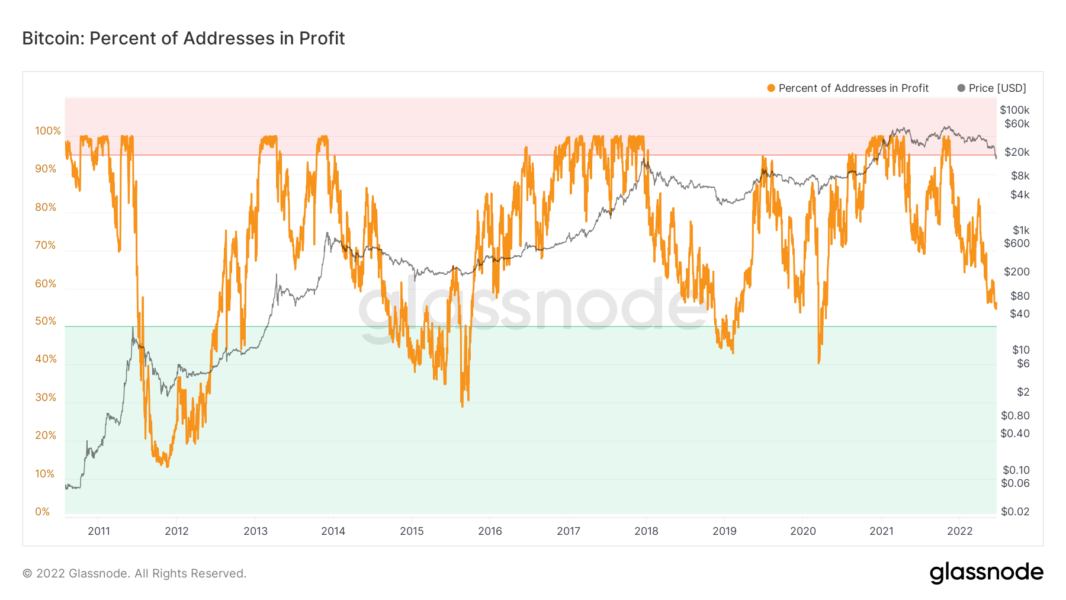 For example, profitable addresses dropped to 41% in March 2020, and before that, the 2018 bear market also saw a drop below the 50% mark. Should this trend repeat itself, it means that there is a high possibility of Bitcoin falling below $15,000.

Speaking of how much selling needs to take place before the market reverses, Dylan LeClair, senior analyst at UTXO Management, saw a split between retail and derivatives traders. Previously, retail has sold first, and speculators come in to finish the process by shorting BTC to unnaturally low levels, he explained.

“Getting closer,” he summarized in a tweet alongside a chart showing the costs to shorters increasing as price action waned in recent days.

In addition, LeClair concluded that more liquidations are likely necessary in the DeFi space before a definitive bottom can be put in.

Meanwhile, Bitcoin continued the gain on Tuesday trying to hold over the $21,000 level in early signs of recovery. However, traditional financial firms Morgan Stanley and Goldman Sachs stated in client notes that recession risks were “not fully priced in.”

“The bear market will not be over until recession arrives or the risk of one is extinguished,” Morgan Stanley said in its note. Meanwhile, Goldman analysts said stock traders were pricing in a mild recession, “leaving them exposed to a further deterioration in expectations,” Bloomberg reported.