Toncoin: Getting Your Way. Part 1

The Toncoin cryptocurrency was developed independently, but the concept and first drafts got designed by Pavel Durov, the creator of the Telegram messenger. Hence the project’s market niche – it is digital money to pay for services within Telegram. What are Toncoin’s prospects and uses, and does it have a future – let’s find out!

We have already written about various cryptocoins created for specific purposes or as part of broader projects. Among them is even the much-discussed Libra/Diem, which was supposed to serve as a monetary unit within Facebook, Instagram and WhatsApp.

At the end of April, a convenient way to make payments using the Toncoin cryptocurrency became available to all Telegram users. Now, the messenger can be used to directly transfer Toncoin without long addresses, commissions, or waiting for transaction confirmation. First, you need to activate the Wallet bot – a Telegram crypto wallet that allows you to buy Toncoin and Bitcoin with a bank card, as well as exchange and transfer cryptocurrency to other wallets.

Although I guess this is the case when it is better to start with the project’s history. Telegram Open Network (TON) was developed by Pavel Durov and his brother as an entire operating system on the blockchain meant to be integrated with the rapidly gaining in popularity Telegram messenger. From the outset, the TON structure included the TON Payments module with its own cryptocurrency called Gram.

All 5 billion Gram tokens were to be minted immediately and offered to investors. Of those, 50% were supposed to fund a non-profit organization – TON Reserve – that would stabilize the Gram rate against the dollar, acting as a central bank. It would also ensure the free conversion of dollars to Gram and exit from Gram to USD. TON Reserve could automatically start buying Grams from the market when the coin’s price declined and guarantee the release of new Grams at a cost at least 2% higher than a year earlier. The presence of this “virtual Fed” would purportedly prevent attempts at building a Gram financial pyramid. TON Reserve, working independently from the token developers, concentrated in another organization (TON Foundation), would aim to ensure that Gram was primarily a means of payment with a stable exchange rate against the dollar.

4% of Gram coins were set to be the premium reward for TON developers. Another 10% would go to the non-profit TON Foundation, which served to maintain the TON infrastructure in working condition. The rest was to be earmarked for gradual sale to investors and the subsequent entering into circulation. The TON blockchain promised to process transactions faster than Ethereum.

Telegram Open Network was conceived by Pavel Durov back in 2017. Unfortunately, in 2019, the US Securities and Exchange Commission intervened in the project. It demanded that the issue of Gram coins be formalized as a securities deal, which is more bureaucratic and expensive. Durov did not comply, raising $1.7 billion for the development of TON through an initial coin offering (ICO). US regulators then declared both the Gram token and ICO illegal and forced him to pay a fine and return the money to investors.

In May 2020, Pavel Durov officially closed his blockchain project. But the idea got picked up by independent developers taking advantage of TON’s open-source nature. On May 29, 2020, one of the teams that included programmers, validators, winners of Telegram public blockchain contests, and crypto enthusiasts announced the continuation of the project under the name NEWTON. It resumed the work on the original Telegram team testnet2 network, initially launched on November 15, 2019.

Later, the development team changed the name from NEWTON to the TON Foundation – the organization was proclaimed a non-profit association tasked with further support and development of the network. The team then renamed Telegram Open Network (now The Open Network) and the Gram token (now Toncoin). On August 9, 2021, EXMO became the first crypto exchange to list the new cryptocurrency – Toncoin (TON). Pavel Durov, who has been living in Dubai since 2017, personally voiced support for the TON Foundation: “I am proud that the technology we created is alive and evolving… TON is years ahead of everything else in the field of blockchain.”

The Toncoin blockchain uses the PoS consensus algorithm; mining is not required to generate more blocks. The entire mass of 5 billion coins was transferred to special Proof of Work Giver smart contracts. New tokens can be obtained by mining these contracts. Proof of Work Giver contracts are limited and will expire once users have mined all available coins.

On April 11, the TON Foundation announced the launch of an ecosystem fund focused on supporting projects on the TON blockchain by securing an initial collective commitment of up to $250 million from major industry players. The fund’s members include Huobi Incubator, KuCoin Ventures, MEXC Pioneer Fund, 3Commas Capital, blockchain startup Orbs, TON Miners, and Kilo Fund. Funds are allocated through incubation, investments, grants, hackathons, and educational programs as projects are accepted and incubated.

And now the cryptocurrency has been integrated with the Telegram messenger, whose users can send and receive Toncoin. At the time of this article, the price of one Toncoin is $1.56; the overall market capitalization is $1.91 billion. 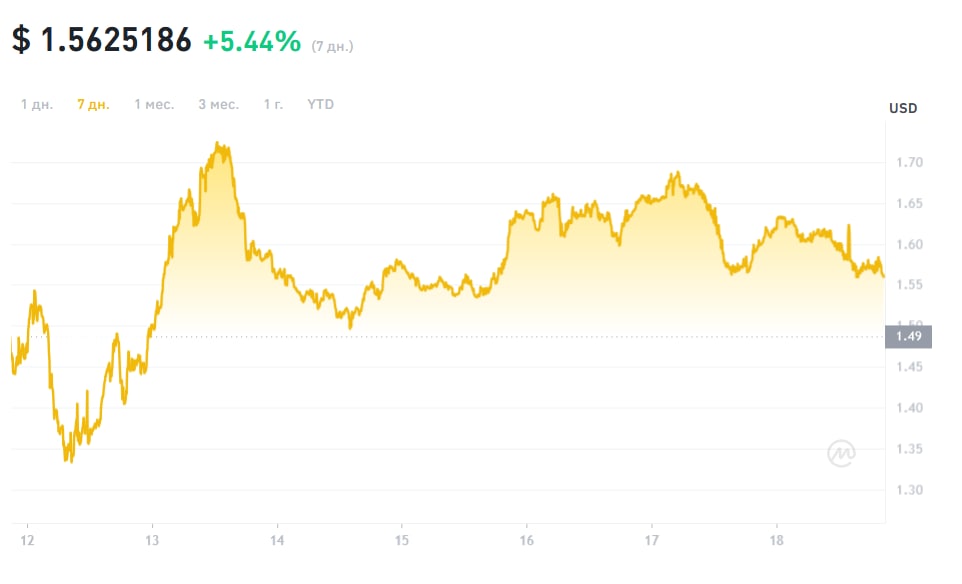 The Toncoin token appeared on the OKEx and FTX crypto exchanges on November 12. Soon, its value soared from $0.7 to $5.7, only then gradually dropping to the current level. Shortly before the listing, TON got actively promoted on the Telegram advertising platform, even though neither the messenger nor Pavel Durov is officially related to the project.

It is also important to understand the nature of Telegram. It is no longer just a messaging tool but also the newest media format (thanks to easy-to-create channels) and a popular social network (thanks to numerous chats). Three in one, you have a multifunctional communication tool with minimal censorship and extensive business opportunities.

Telegram’s cryptocurrency transfer feature greatly simplifies the use of Toncoin – token holders do not need to pay fees, enter long wallet addresses, or wait for confirmation. All you need is to add the Wallet bot to Telegram and link your bank card to it – now you can send Toncoin just like a message!

blockchain messenger Telegram TON Toncoin transaction
You May Also Like