What can the FT archive tell us about the future of Bitcoin?

A deep dive into the FT archive reveals what has driven the cryptocurrency’s falls and rises.

Bitcoin has crashed in value by more than 50% in the past six months, but holders of the cryptocurrency are used to volatility. Here we look at how the FT covered Bitcoin’s previous booms and busts to see if history is repeating itself. 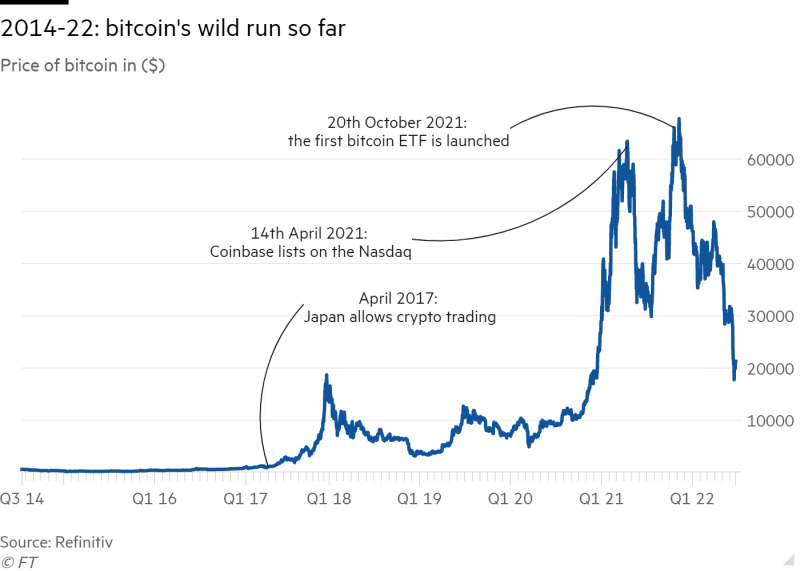 The boom was triggered by a rush of interest, first in Japan and then in South Korea. Small investors started gambling on Bitcoin, drawn in by primetime television adverts and billboards boasting of high returns. After Japan authorized trading on 11 crypto exchanges in April 2017, the country accounted for some 40% of daily trading activity worldwide.

But a crash soon followed. By the beginning of 2018, so-called Bitcoin “whales”, the biggest holders of the cryptocurrency, started cashing out to take advantage of the high prices. The mood then soured when the Japanese exchange Coincheck was hacked, losing $530mn of XEM, another popular cryptocurrency. 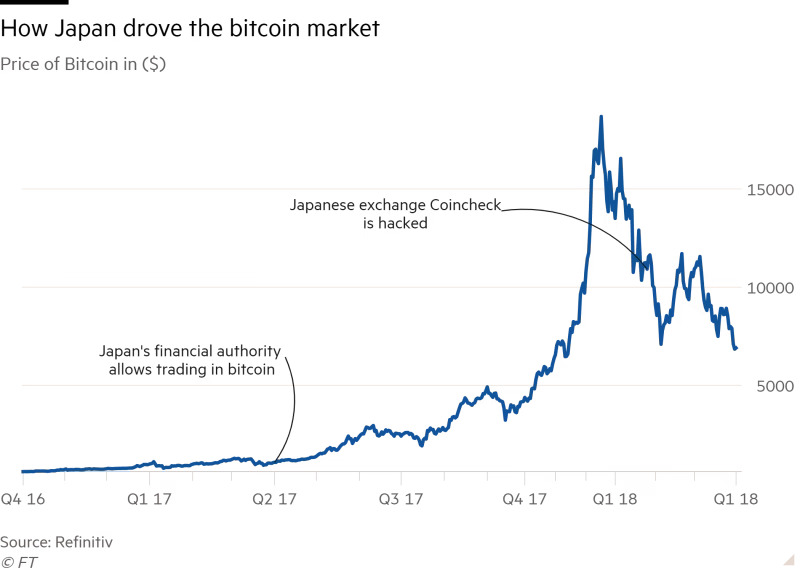 While no Bitcoin was stolen, the hack unnerved small investors, who fretted about the safety of holding digital currencies, especially after Japan’s financial regulator raided Coincheck’s offices in February.

Between March 2018 to May 2019, Bitcoin traded below $10,000 as critics and regulators voiced their doubts over its future.

In London, for example, traders and institutions were cautious about engaging with cryptocurrencies because of fears over fraud, financial crime, and other reputational risks.

The fire sale in early 2018 by Bitcoin whales led to worries over the influence that large accounts had over the cryptocurrency’s price. In April 2018, some 1,600 Bitcoin wallets held nearly a third of all the Bitcoin available. Of those, 100 wallets contained over 10,000 Bitcoin.

Cameron and Tyler Winklevoss, for example, who were best known for unsuccessfully suing Mark Zuckerberg over the idea that became Facebook, were some of the biggest whales, buying a reported 120,000 Bitcoins in 2012.

The winter deepened after a fight over a fork in the cryptocurrency, when new versions of Bitcoin were created, sending the price to its lowest level since the start of 2017. 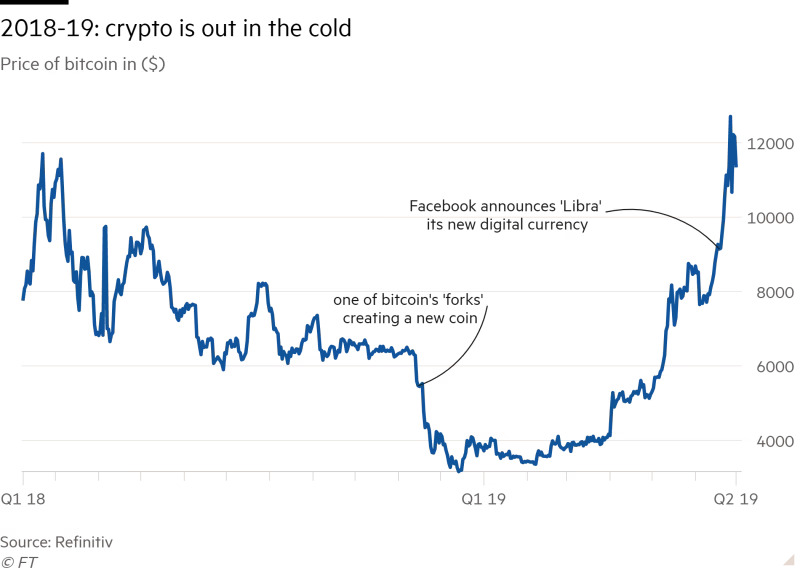 But in June, Bitcoin got a boost from an unexpected source: Facebook. The world’s biggest social media company unveiled plans for Libra, its own digital currency. While Libra ultimately remained just a dream, the news that Facebook was planning to enter the sector raised confidence in Bitcoin’s sustainability.

After the initial shock of the pandemic, Bitcoin started to gain ground after PayPal announced it would start allowing users to hold cryptocurrencies.

Stuck in lockdown, and with government stimulus cheques to spend, retail investors began to gamble on Bitcoin’s rise. In six months, the cryptocurrency soared from under $12,000 to over $63,000.

The steep climb caught the attention of institutional investors too, and excitement peaked with the initial public offering of Coinbase, the biggest crypto exchange, which opened at a valuation of nearly $76bn on Nasdaq in April 2021. 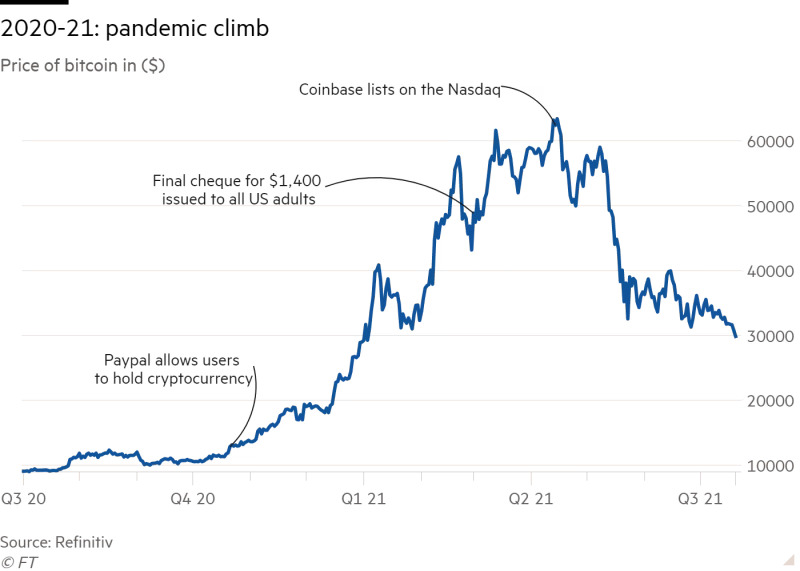 But the high did not last long. China banned crypto mining, the use of computers to solve puzzles to earn cryptocurrencies, in September 2021, though activity quickly switched to other countries.

Then the US and Europe again raised the prospect of regulation.

Finally, day traders were caught up in a frenzy of meme stocks, many of them cashing out of their Bitcoin in order to play the equity markets, and more fears were raised, including by Elon Musk, about the environmental cost of crypto mining. Bitcoin slipped to a low of just below $30,000 in late July.

Bitcoin fans originally insisted that it was a hedge against inflation and immune to swings in other markets.

In October 2021, the cryptocurrency went fully mainstream with the launch of an exchange-traded fund, which allowed investors to have exposure to its rises and falls without holding any Bitcoin directly. Days after the ETF began trading, Bitcoin hit an all-time high of nearly $69,000.

But as a mainstream asset, its fortunes have become much more closely aligned with broader market sentiment. 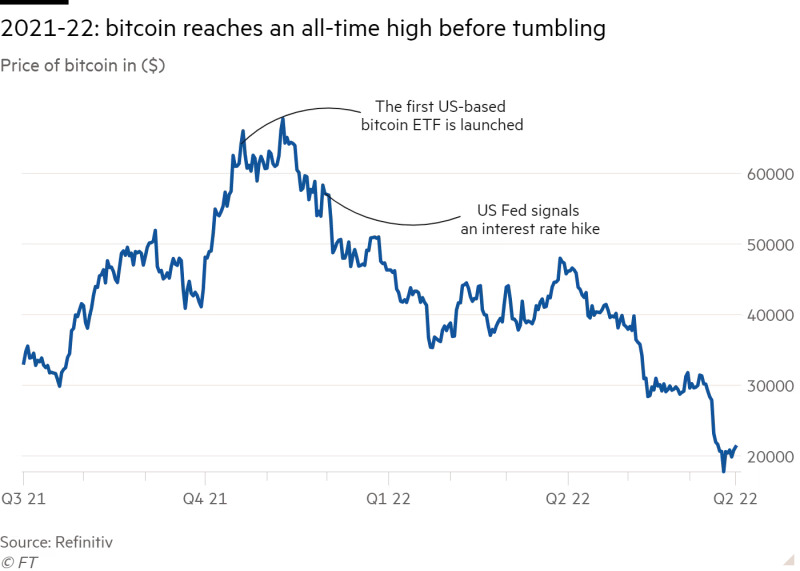 Fears in the US economy in early December over rising inflation and future interest rate rises saw Bitcoin’s price tumble heavily and over the following months, Bitcoin fell in line with the downturn in US tech stocks.

When inflation worsened this year, Bitcoin suffered further and in June had its worst week since 2020. ProShares, the company behind the first Bitcoin EFT, launched a new fund to profit off Bitcoin’s fall.

Bitcoin’s previous booms have all been powered by small investors rushing into the market, hoping to turn a remarkable profit in a short time. Its subsequent crashes have come as regulators, the broader market, or worries about the risks of the sector spooked Bitcoin holders into cashing out.

Looking forward, while regulators have promised to be “unrelentingly hard”, it remains largely unclear how any future rules around the cryptocurrency will work in practice. But there is more evidence of joined-up thinking, and if regulators do succeed in setting rules, they will help the crypto industry build more trust, and perhaps finally deliver some stability.